Around a hundred thousand people perished in Chernobyl. The toll from the nuclear disaster in Fukushima is likely to be high. The CNDP demands a moratorium on all further civilian nuclear activities in India and thorough review and transparent audit of the safety performance of all nuclear reactors.

Update: See the CNDP's most recent press release (28 March 2011): The Nuclear Crisis in Japan: a Wake-Up Call for India

"The following statement was released by the Coalition for Nuclear Disarmament and Peace (CNDP, in which two TNI fellows, Praful Bidwai and Achin Vanaik, are members.

"The Coalition for Nuclear Disarmament and Peace (CNDP) expresses its deep grief and sorrow at the devastation caused by the earthquake and tsunami in Japan and the explosion at the Fukushima nuclear reactor, which reportedly suffered a loss-of-coolant accident.

"The accident, in which unspecified quantities of radioactivity were released, highlights the grave inherent hazards of atomic power generation the world over, and confirms the scientific assessment that all nuclear reactor-types can undergo a catastrophic accident like Three Mile Island (US, 1979) and Chernobyl (Ukraine, 1986), irrespective of the precautions taken and safety systems installed.

"An estimated 65,000 to 110,000 people perished in Chernobyl. The toll from Fukushima is as yet unknown, but is likely to be high.

"The incident calls for a thorough review and transparent audit of the safety performance of all nuclear reactors in India, as well as of evacuation and other emergency procedures, which are known to be flawed.

"CNDP demands a moratorium on all further civilian nuclear activities in India, including the construction of reactors at Jaitapur in Maharashtra, based on an untested French design, until India’s nuclear power policy is radically reviewed for safety, viability, appropriateness and costs." 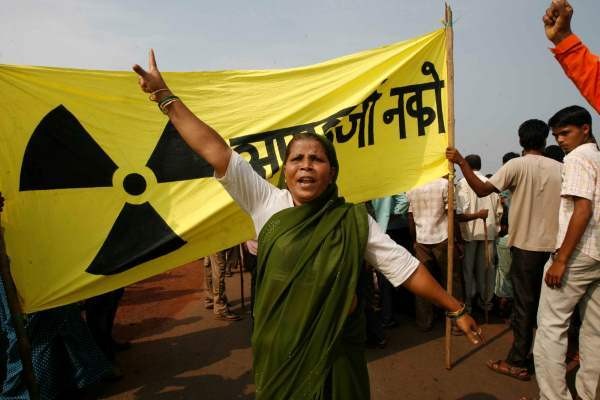 In India, there has been a long campaign opposing the Jaitapu nuclear plant, which is planned to built on 2,300 acres of land that was has been forcibly acquired under colonial law, resulting in the flattening of mountains, destruction of forests, harbours, farmland, horticulture and fisheries which sustain 40,000 people. With encouragement from the French Government, the 6 AREVA-designed reactor project has provoked huge public protest, especially from the 2,275 families who have been forcibly evicted from the land. More over, the reactors are the same design as those used in the Finnish plant which is already 90 per cent over budget and 42 months behind schedule.

Report by Praful Bidwai: The People vs Nuclear Power in Jaitapur, Maharashtra