The corporate world’s embrace of 'purpose' may seem commendable. But without any enforcement mechanisms, the profit-motive will always win out.

Profit is apparently no longer the goal for corporations. Now, it’s all about ‘purpose’. This week, the corporate-led World Economic Forum (WEF) proudly published its Davos Manifesto in the Financial Times and Wall Street Journal asserting a vision of ‘the universal purpose of a company’. WEF’s founder Klaus Schwab said the manifesto offers ‘the best response to today’s social and environmenta... Read more

The call, made in an open letter, denounces attempts to ‘delegitimiz[ing] the United Nations and weaken(ing) the role of states in global decision-making.

More than 400 civil society organizations and 40 international networks have called on the United Nations (UN) Secretary-General to end the recently signed UN’s Strategic Partnership Agreement  with the World Economic Forum (WEF). The call, made in an open letter, condemned the agreement for ‘delegitimiz[ing] the United Nations and weaken(ing) the role of states in global decision-making. &gt... Read more

The UN Secretary General and the World Economic Forum signed on June 13 a Strategic Partnership Agreement for the implementation of the 2030 agenda (SDG). More than 400 organisations signed the following letter demanding the end of the agreement and denouncing it for formalising the corporate capture of the UN and moving towards an increasingly privatized and less democratic global... Read more

We the undersigned call on you to terminate the recently signed United Nations-World Economic Forum strategic partnership agreement.... Read more

The voice of communities involved in illicit cultivation had long been excluded from policymaking platforms. However, thanks to growing networks such as the Myanmar Opium Farmers Forum, more and more farmers have gained more space to provide input to drug policy discussions at the UN level.

Video of Myanmar Opium Farmers Forum at the Commission on Narcotic Drugs in October 2018 This video, prepared by the Myanmar Opium Farmers' Forum (MOFF), was presented at the fourth intersessional meeting at the Commission on Narcotic Drugs (CND), specifically during a session on Alternative Development and Crop Control Strategy on 24 October 2018. The session was part of a wider set of me... Read more

In the early 2000s, a new form of counterterrorism policy - Countering Violent Extremism (CVE) - emerged, pioneered first in Europe before spreading to the rest of the world. Within a decade, as policies were copied from one state to the next and taken up by the European Union, United Nations, and a host of other international fora, CVE was globalized. From Finland to the Philippines, CVE policies have been presented as the smarter and more liberal approach to countering terrorism than the crude and inflammatory “war on terror.”

Please note that attendance at this event requires pre-registration at least 48 hours in advance. Attendees will need to present ID at the entrance to the UN Building if they do not already have a UN badge.

At this New York launch event for the The Globalisation of Countering Violent Extremism Policy report, the adoption of CVE by policymakers within international institutions will be analyzed and assessed from a human rights perspective. 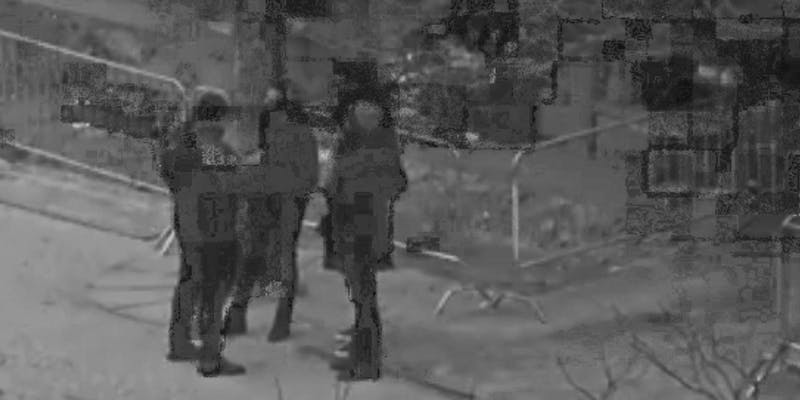 More than 100 states and over 200 representatives of social movements, trade unions and civil society organizations were at the UN in Geneva during the third session of the UN intergovernmental working group on transnational corporations and other business enterprises with respect to human rights, from October 23-27, 2017. Members of parliaments from more than 20 countries and the European Parliament, as well as more than 700 civil society organizations have indicated strong public support for the process.

At the end of an intense and inspiring week, the closing Recommendations of the Chair-Rapporteur of the working group, Ambassador Guillaume Long, Permanent Representative of Ecuador in Geneva, committed to a road-map for the negotiation process for the fourth working group session in 2018 and to further annual sessions.


'The end of corporate impunity is coming': Video by the Global Campaign

The Draft Report and Conclusions were approved by consensus and will be submitted for final approval to the UNHRC in March 2018. Furthermore, it was agreed that the Elements paper towards a Treaty proposed by Ecuador in this third session remains open for further comment until the end of February and will then, together with the outcomes from the 2015 and 2016 sessions, form the basis for developing the zero draft treaty for the fourth working group session in 2018.

TNI was present in Geneva as an active member of the Global Campaign to Reclaim Peoples Sovereignty, Dismantle Corporate Power and Stop Impunity. The Campaign is a peoples’ global structural response to unaccountable corporate power that provides facilitation for dialogue, strategizing, exchanging information and experiences, acting as a space for visibility of resistance and deepening of solidarity and support for struggles against transnational corporations (TNCs).

TNI is also a founding member of the Treaty Alliance, a global coalition of 900 civil society organisations supporting the creation of the UN Binding Treaty.

Day by day updates from the Treaty Alliance during the third session are gathered together in this storify below. 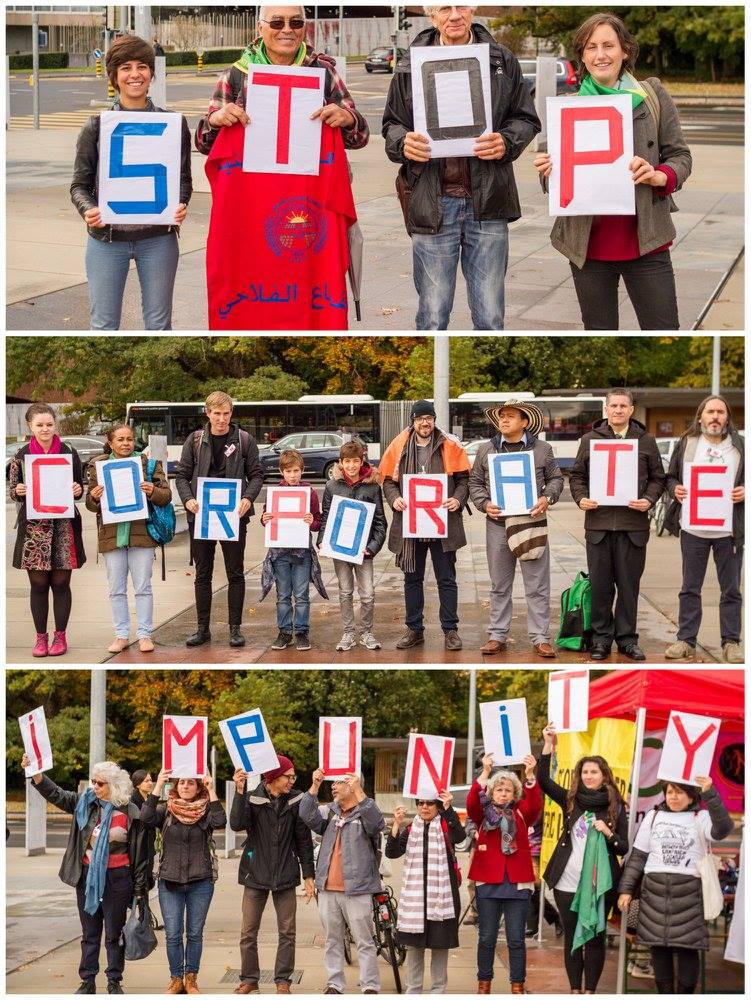 More than 100 states and over 200 representatives of social movements, trade unions and civil society organizations were at the UN in Geneva during the third session of the UN intergovernmental working group on transnational corporations and other business enterprises with respect to human rights, from October 23-27, 2017. Members of parliaments from more than 20 countries and the European Par... Read more

Act for human rights from FOTOSconLETRA on Vimeo.


The Second Session of the Open Ended Inter-Governmental Working Group (OEIGWG) at the Human Rights Council with the mandate to establish a Binding Treaty on Transnational Corporations and other business enterprises with respect to human rights takes place in Geneva from 24th to 28th October. In June 2014, the Human Rights Council adopted Resolution 26/9, which established the mandate of the OEIGWG; a historic achievement after decades of discussions and failed attempts within the United Nations.

In 2015 the Global Campaign to Reclaim Peoples Sovereignty, Dismantle Corporate Power and Stop Impunity was present during the First Meeting of the OEIGWG, and organised several activities to pressure governments to engage with the process of building a Treaty with binding rules for Transnational Corporations in respect of human rights. A legally binding Instrument is essential for two dimensions of the Global Campaign’s work: to end the impunity of transnational corporations that violate human rights, and to address their increasing influence at the national, regional and international level without the implementation of accountability mechanisms.

If you are not attending the Week of Peoples Mobilisation you can follow our activities on our Storify (coming soon), Facebook and Twitter, as well as participate in some sessions virtually by streaming (more information coming soon).

Why a Week of Peoples Mobilisation? The need to confront the Architecture of Impunity:

Between transnational corporations, states and peoples, there is an undeniable asymmetry. With the complicity of states claiming the need to “attract investment”, transnational corporations have covered themselves with a solid armour of free trade and investment protection agreements and their respective sanctioning mechanisms. Institutions such as the International Centre for Settlement of Investment Disputes (ICSID) constitute clear examples of the privatisation of justice, as well as any ISDS mechanism.

In coordination with the Treaty Alliance, the Global Campaign will work in Geneva to advocate directly to UN member states to engage in a process to create a treaty, and to ensure they hear the voices of communities impacted by corporate violations loud and clear.

8 points: Written Contribution of the Global Campaign to the first session of the IGWG (2015)

UN information on the Second Session of OEIGWG

UN information on the Mandate of the OEIGWG

May 2016, Geneva: Peoples Mobilisation vs. Corporate Impunity converge at the UN

May 2016, Brussels: How to Hold Transnational Corporations Responsible for Human Rights Violations, Hearing at the European Parliament

Week of Peoples Mobilisation in 2014

Violations of human rights and the rights of peoples and nature have become an all too common part of transnational corporations’ operations. There are no binding rules for corporations on Human Rights at the international level. That’s why again this year, in coordination with the Treaty Alliance, the Global Campaign is returning to Geneva to advocate directly to UN member states to engage in a process to create a treaty, and to ensure they hear the voices of communities impacted by corporate violations loud and clear. Inside and Outside the UN dozens of delegates from social movements and civil society networks worldwide will participate in the Week of Peoples Mobilisation.