Towns and cities stand at the heart of the new public future. Between 2000 and 2019, there were over 1400 new cases of “municipalisation” or “remunicipalisation”, the creation of new public enterprises run by local governments or the return of privatised enterprises to municipal hands. This trend occurred across 2400 locales in 58 countries. 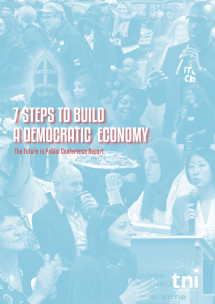 About 7 steps to build a democratic economy

In the grip of an increasingly emboldened right-wing nationalism, our world is in turmoil. From India to Turkey, Brazil to the US, a series of dangerous populists have come to power on a racist, climate-denying and crony-capitalist agenda.

The timing could not be worse. Ecological breakdown looms imminent. Global inequalities are sharper than ever. Decades of neoliberalism have torn apart our social fabric, leaving countless people across global North and South struggling to access the basics of survival amidst widespread privatisation and the marketisation of everything under the sun. Indeed, it is these crises of capitalism that have empowered the far right, who have turned desperation into division to perpetuate the position of the wealthy and powerful.

Yet, in spite of all this, something else is happening. Simultaneously, social movements and governments across the world have begun to quietly build a different future: a public future grounded in solidarity, equality, sustainability and radical democracy.

At the heart of this new public future stand towns and cities. New research from TNI and international partners shows that between 2000 and 2019, globally, there were over 1400 new cases of “municipalisation” or “remunicipalisation” -- the creation of new public enterprises run by the local governments or the return of privatised enterprises to municipal hands. This trend has occurred across 2400 locales in 58 countries. Workers and their unions have often been at the heart of these remunicipalisation efforts, striving to improve workplace conditions while endeavouring to place their valuable knowledge and experience at the centre of public services.

This “new municipalism” has not emerged in isolation. Rather, it arises in a broader agenda of economic democracy pursued across a range of scales including but not limited to the city. From the workers co-operative that has taken over cleaning services in Recoleta, Chile through to the suite of nationalisations recently proposed by the British Labour Party, new forms of public and collective ownership are being developed in our workplaces, our neighbourhoods, our towns, our cities, our countries, our world.

Why now? Why, after years of being told that there is no alternative to capitalism, is public ownership back on the table? What changed to make this possible? While there are surely many factors at play here, perhaps the most clear-cut is that privatisation now stands more discredited than ever before.

While we were initially sold privatisation on the basis of its “efficiency”, study after study has found little evidence that private ownership is inherently more efficient than public ownership. What we have seen, instead, are increasing costs and declining quality for service users, worsening conditions for workers and a total breakdown of democratic accountability, transparency and control. The myth that “private is better and cheaper” can no longer be sustained. It’s little wonder, then, that people are demanding change and that especially local governments are starting to act.

If the future is public, what will this look like and how will it be built? This was the question animating the international conference on 4-5 December 2019 convened by The Transnational Institute, De 99 Van Amsterdam (the city’s new think and do- thank) and international partner organisations. For two days, activists, researchers, trade unionists, politicians and policymakers from across the world gathered to share experiences, build solidarity and further plans for economic democracy. This report provides a brief snapshot into some of the discussions that took place. While unfortunately not everything could be captured, the hope is that a number of the key questions, tensions and ideas are recorded here, as a basis for further debate. The report identifies 7 steps that are vital to build a democratic economy, which emerged out of the discussions in Amsterdam. Each of these is addressed in the pages that follow.

The conference was hosted in the vibrant and diverse Bijlmermeer neighbourhood of Southeast Amsterdam, a place with an important history of struggle that resonated throughout our discussions. As a neighbourhood rich in a multitude of different migrant communities, subject to ongoing racist criminalisation and chronic underinvestment, Bijlmermeer is on the frontline of the processes of gentrification and racial injustice that any new public future must resist. Defending the right to housing and education is a particular challenge for the people of Bijlmermeer, who over the past ten years have organised collectively to win significant improvements in this regard. From an opening welcome from Tanja Jadnanansing, the Chairperson of the Executive Board of Amsterdam’s Southeast borough, to a crucial intervention on the history of black struggle in the Netherlands and beyond from Mitchell Esajas of the Amsterdam-based Black Archives, our international gathering endeavoured to remain rooted in the specific struggles of the place in which we met.