State of Power 2020 The Corporation

The Corporation is capitalism's preeminent institution, dominating our economy, distorting our politics and reshaping society. TNI's ninth flagship State of Power report delves deep into the changing nature of the corporation in a time of digitalisation and financialisation and asks how we might best confront its power and construct alternatives. 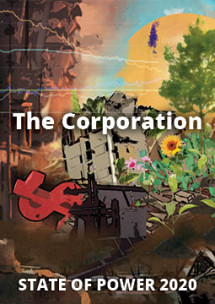 Charming psychopaths: The modern corporation
An interview with Joel Bakan
The biggest change corporations have made in the last 15 years has been their embrace of commitments to sustainability and social responsibility. Writer of the acclaimed 2003 book and film, The Corporation, Professor Bakan argues that the 'new corporation' is ‘probably even more dangerous' than its predecessor.

The intelligent corporation: Data and the digital economy
Anita Gurumurthy and Nandini Chami
The Corporation is on the cusp of achieving ‘quantum supremacy’ as a result of its massive accumulation of data powered by algorithmic-based intelligence. Social movements need to grasp this change quickly.

Beyond ‘China, Inc.'understanding Chinese companies
Lee Jones
119 of the Fortune 500 list of the world’s largest companies are now Chinese, just behind the US (121). How does a Chinese transnational differ to a Western one and what are the implications for movements that confront their impacts?

The corporate architecture of impunity: Lex Mercatoria, market authoritarianism and popular resistance
Adoración Guamán
National and international law has been increasingly codified by transnational corporations to protect them from accountability for human rights violations and to bolster a politics of market authoritarianism.

The financialised firm: How finance fuels and transforms today’s corporation
Myriam Vander Stichele
The financial sector does not just provide a lifeline to corporations, it is actively helping them expand and changing the very nature of the modern corporation.

Touching a nerve: How a peoples’ campaign at the United Nations is challenging corporate rule
Brid Brennan and Gonzalo Berrón
Corporate rule may seem immutable and irreversible, but a popular movement in alliance with some governments is forcing corporate accountability onto the international agenda.

The end of the Corporation? It’s time to make the profit-maximising, shareholder-controlled corporation obsolete
Marjorie Kelly
We need to envisage and create an entirely new concept of the company – a just firm – designed from the inside out for a new mandate: to serve broad wellbeing and the public good.

Rethinking the Corporation
Conversation with Tchenna Maso, Nomi Prins and Barnaby Francis
A Brazilian human rights activist, an artist hacker and a former Wall Street Banker discuss the nature of today's corporation, how to best mobilise against its power and impunity, and what could replace it.

The limits of law: why ‘corporate accountability’ will not change the corporation
Grietje Baars
Law is fundamentally limited in its potential to challenge corporations' power and their harm, because the law has been created to facilitate capitalist accumulation and therefore the rights of the property-owning class to force others to submit to its will. It cannot, therefore, be expected to have any emancipatory potential.

The Corporate State
Mathias Hein Jessen
In order to understand corporate power today, we need to understand their history and how they have always been a fundamental part of how the state has governed and continues to govern social life.  Understanding their intertwined relationship with the state means we can also imagine the possibility of a different kind of corporate subject than the shareholder-driven, publicly traded, for-profit corporation.

Bright lights, tech city for the no-collar worker
Filipa Pajević and Carla Maria Kayanan
Every city seems now to be looking for its 'Silicon Valley'. But what's the reality for cities that embrace Big Tech? Exploring two-case studies in Dublin, Ireland and Kitchener-Cambridge-Waterloo in Canada, this essay explores how urban space and public policy is transformed by digital corporations and how the allure far exceeds the concrete benefits.