The vision of food sovereignty calls for radical changes in “agricultural, political and social systems related to food”. These changes also entail addressing inequalities and asymmetries of power in gender relations. 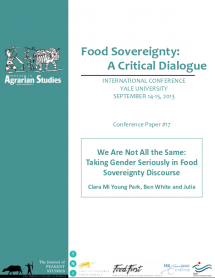 We Are Not All the Same: Taking Gender Seriously in Food Sovereignty Discourse (PDF, 527.9 KB)

About we are not all the same

The vision of food sovereignty calls for radical changes in “agricultural, political and social systems related to food”. These changes also entail addressing inequalities and asymmetries of power in gender relations. While women’s rights are seen as central to food sovereignty given the key role women play in food production and procurement, food preparation, family food security and food culture, few attempts have been made to systematically integrate gender in food sovereignty analysis. This paper uses case study evidence from countries where corporate agricultural expansion is on-going to highlight the different ways and wants of incorporation and struggle that take place on the ground depending on women and men’s different position, class and endowments. These, in turn, are contributing to processes of social differentiation and class formation thus to creating rural communities and societies that are much more complex and antagonistic than those sketched in food sovereignty discourse and neopopulist claims of egalitarianism, cooperation and solidarity. We argue that proponents of food sovereignty need to systematically address gender as a strategic element of its construct and not only as a mobilising ideology. We also maintain that if food sovereignty is to have an intellectual future within critical agrarian studies, it will have to reconcile the inherent contradictions of the “we are all the same” discourse taking the analysis of social differences, such as class, gender and ethnicity, as a starting point to challenge existing inequalities of power.

Clara Mi Young Park
PhD candidate at the International Institute of Social Studies in The Hague and a gender and social equity consultant with the Food and Agriculture Organization of the United Nations (FAO).
Ms. Park has recently coauthored Governing Land for Women and Men, a technical guide to support the achievement of responsible gender-equitable governance of tenure. Email: park@iss.nl.
Ben White
Emeritus Professor of Rural Sociology, International Institute of Social Studies, The Hague.
Professor White is co-author “of Agrofuels capitalism: a view from political economy” (with A.Dasgupta, 2010), and co-editor of The new enclosures (2012) and Governing the global land grab (2013). He is a founding member of the Land Deal Politics Initiative. Email: white@iss.nl
Julia
Presidium member of the Kalimantan Women Alliance for Peace and Gender Justice (AlPeKaJe) based in West Kalimantan, Indonesia.
Julia* is currently involved in a research on political ecology of the Kapuas River in collaboration with Bonn University and Bremen University. She is co-author (with Ben White) of “Gendered experiences of dispossession: oil palm expansion in a Dayak Hibun community in West Kalimantan” (Journal of Peasant Studies, 2012). Email: juliajoel12@yahoo.com
*(this is her full name).

We Are Not All the Same: Taking Gender Seriously in Food Sovereignty Discourse (PDF, 527.9 KB)