Myanmar's National Land Use Policy promises to make profound changes to the current economic, social, and political-institutional landscape. This is an important and bold step, but its impact will depend on how it addresses the often “messy” details of actual land based social relations. 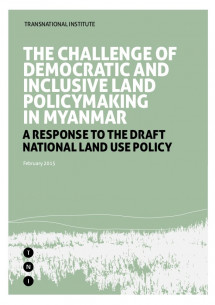 The Challenge of Democratic and Inclusive Land Policymaking in Myanmar (PDF, 400.72 KB)

About the challenge of democratic and inclusive land policymaking in myanmar

In October 2014 the Myanmar government unveiled a draft National Land Use Policy (NLUP) and announced it would take public comments for a limited time before finalizing the document. Once it is finalized, the new policy will determine the distribution, use and management of the country’s land and related natural resources like forests and rivers, for years to come.

It promises to make profound changes to the current land-related economic, social, and political-institutional landscape. This is an important – and bold – step for Myanmar, with its complex history of political and armed conflict and protracted displaced populations. More so because land policymaking also tends to involve simplification – that is, putting aside real-life facts and phenomena that have the potential to derail formal-legal standardization agendas.

Some simplification is unavoidable. But policies that too narrowly follow overly neat categories of land use will be unable to detect, adapt to or address many of the most significant and “messy” details of actual land based social relations. These are often the very facts that need to be understood and taken into consideration in the first place. So the big question at the heart of the NLUP process is: whose details are going to count? This briefing examines this question with a particular emphasis on an ethnic minority perspective.

An inclusive land use policy-making process that allows for - and encourages - full and meaningful participation for all rural working people is essential for ensuring a policy outcome that is widely and effectively accepted by society.

It is a significant and welcome development that the public is invited to submit comments and recommendations. If the government is to make this step matter, then it must follow through. It must ensure that the issues, concerns, and aspirations expressed by those whose lives and livelihoods are most affected or threatened by forced eviction and dislocation, land confiscations and large-scale land deals, leave a substantial imprint on the policy that finally gets adopted.

The English version of the draft NLUP (as uploaded onto the government website) is positive in some ways and includes several key provisions that would improve Myanmar’s current land governance arrangements. But it still needs improvement especially in terms of some fundamental principles in order to be better positioned to address these key and urgent land policy challenges.

Overall, for Myanmar’s land policy to succeed, it must seek to:

This is because the current land problem plaguing Myanmar society today is rapidly increasing land polarization, which in turn, is tied to a deeper set of problems related to three main and broadly distinct types of situations affecting rural working households and peoples:

The NLUP could be further improved in line with international standards. Given this urgent situation, we make the following overall recommendations:

In support of making these improvements to the NLUP draft, the Voluntary Guidelines for Responsible Governance of Tenure of Land, Fisheries and Forests in the Context of National Food Security (hereinafter referred to as “Tenure Guidelines”) are indispensable.

The Tenure Guidelines are the highest international standard on tenure of land, fisheries and forests to date and must be read in conjunction with other relevant international human rights instruments. The Myanmar Government is a signatory to these guidelines, which makes using them as the standard by which to improve the NLUP policy especially relevant and appropriate.

On the need to protect existing democratic access to land where this already exists but is or may be threatened, through legal recognition and allocation of tenure rights, guidance can be found in Article 7 (Safeguards), Article 8 (Public land, fisheries and forests), Article 9 (Indigenous peoples and other communities with customary tenure practices.

On the need to promote democratic access to land where poor, vulnerable and marginalized people have little or no access, through distributive and redistributive reform, guidance can be found in Article 15 (on land redistribution and land ceiling).

On the need to restore democratic access to land through land restitution in cases where people have lost their prior access as a result of armed conflict or natural disaster, guidance can be found in Article 14 (on land restitution).

The NLUP could be further improved in line with international standards by explicitly declaring the following as policy aims in the Preliminary section of the document:

Additionally, it is recommended to make the following improvements to some specific chapters:

The Challenge of Democratic and Inclusive Land Policymaking in Myanmar (PDF, 400.72 KB)