Citizens and policy makers around the world are increasingly questioning the trade agreement system, especially the investor-state dispute settlement mechanism (ISDS) that enables foreign investors to bypass the legal system of host states and sue governments before private tribunals for any policy, democratically passed law, or judgment of a court that adversely affects them. 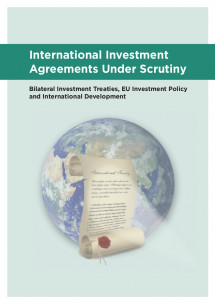 About international investment agreements under scrutiny

International investment agreements (IIAs)1 pose serious threats to democracy and the rule of law, important European values to which we are committed in our trade policy;2 to public interests in social, environmental, health and consumer safety issues, and to the sovereign rights (and duties) of states to govern. Awareness of these risks is spreading. As concern around TTIP shows, both citizens and policy makers around the world are increasingly questioning this system, especially the investor-state dispute settlement mechanism (ISDS) that enables foreign investors to bypass the legal system of host states and sue governments before private tribunals for any policy, democratically passed law, or judgment of a court that adversely affects them.

Developing countries that sign IIAs with developed countries are taking a high risk gamble. In return for hoping to stimulate foreign direct investment (FDI) they severely restrict their policy space. But growing evidence proves that IIAs as such do not attract FDI – other determinants such as market size and the supply of natural resources are more important. When signing their first IIAs developing country negotiators were largely unaware of the risks posed by ISDS – a perception that only changed when they were hit with the first claims. Given that investment flows are increasingly global, European taxpayers will now more commonly have to foot the bill for claims from emerging market investors. For example, see the box on Ping An vs Belgium, below. The exponential rise in ISDS cases since the 1990s means that it is becoming more and more difficult for policy makers to continue to ignore the deficiencies of the process.

ISDS: violating the rule of law and undermining democracy

Investment arbitration takes place behind closed doors and does not adhere to basic public law principles. The regime has evolved into a business controlled by a few law firms and lawyers prone to conflicts of interest. Investment tribunals are composed of for-profit lawyers instead of independent judges – a system only foreign investors are allowed to use. Evidence shows that even the threat of claims deters government action, the so-called “regulatory chill”. The vague IIA rules provide arbitrators with interpretative leeway enabling them to challenge a broad range of public interest regulation. As IIAs delegate treaty interpretations to arbitrators, tribunals are effectively taking over state functions.

IIAs under scrutiny: reforms of the investment regime

The number of countries reviewing their investment frameworks is growing. Developing nations have made more fundamental changes. Ecuador, Venezuela, Bolivia, South Africa and Indonesia have terminated several IIAs; Bolivia, Ecuador and Venezuela have withdrawn from ICSID; India has frozen all investment negotiations; and UNASUR has created an alternative investment arbitration forum. Limited reforms in the EU, USA and Canada do not yet reflect the growing public concern.