Across the Americas, an unprecedented debate on drug policy reform is underway. While a regional consensus on what form those reforms should take remains elusive, there are at least two issues where consensus is growing: the need to address drug use as a public health, rather than criminal, issue and the need to promote alternatives to incarceration for low-level, nonviolent drug offenders and ensure proportionality in sentencing for drug-related crimes. Draconian drug laws were often adopted in Latin American countries with the encouragement – if not outright diplomatic, political and economic pressure – from the U.S. government. 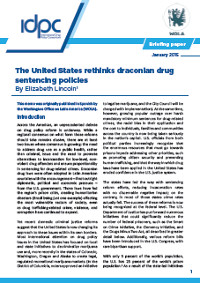 Those laws have fed the region’s prison crisis, creating humanitarian disasters (Brazil being just one example) affecting the most vulnerable sectors of society, even as drug trafficking-related crime, violence, and corruption have continued to expand. Yet recent domestic criminal justice reformssuggest that the United States is now changing its approach to these issues within its own borders. Most international attention on drug policy issues in the United States has focused on local and state initiatives to decriminalize marijuana use and, more recently in the states of Colorado, Washington, Oregon and Alaska to create legal, regulated recreational marijuana markets. (In the District of Columbia, voters approved an initiative to legalize marijuana, and the City Council will be charged with implementation).

At the same time, however, growing popular outrage over harsh mandatory minimum sentences for drug-related crimes, the racial bias in their application and the cost to individuals, families and communities across the country is now being taken seriously in the nation’s capital. U.S. officials from both political parties increasingly recognize that the enormous resources that must go towards prisons impede addressing other priorities, such as promoting citizen security and preventing human trafficking, and that the way in which drug laws have been applied in the United States has eroded confidence in the U.S. justice system.

The states have led the way with sentencing reform efforts, reducing incarceration rates with no discernable negative impact; on the contrary, in most of those states crime rates actually fell. The success of these reforms is now being recognized at the federal level. The U.S. Department of Justice has put forward numerous initiatives that could significantly reduce the number of federal prisoners, such as the Smart on Crime Initiative, the Clemency Initiative, and the Drugs Minus Two Act, all described in greater detail below. Additionally, various reform bills have been introduced in the U.S. Congress, with rare bipartisan support.

With only 5 percent of the world’s population, the U.S. has 25 percent of the world’s prison population.2 As a result of the state-led initiatives underway, for the first time since 1980, the number of people incarcerated in the United States is falling, by nearly 5,000 in 2013. That number is expected to drop by another 12,000 in 2014 and 2015. While that represents just a drop in the bucket given the 2.2 million people presently incarcerated in the United States, it is clearly a step in the right direction.

The culmination of the judicial, executive, and legislative actions to address the current “historically unprecedented and internationally unique” situation in the United States may prove to be a tipping point towards comprehensive reform of prisons, sentencing policies, and more generally, the treatment of drug-related crimes and punishments in the United States.

Numerous Latin American countries are debating reforms to their drug laws. Of particular significance, Ecuador adopted a sweeping reform of its penal code, which dramatically reduces sentences for low-level drug offenses. This represents a significant advance for a country where previously, a low-level trafficker could get a higher sentence than someone who committed murder. The measure went into effect in August 2014 and as provisions of the new penal code can be applied retroactively, as many as 2,000 prisoners were expected to be released by the end of 2014 as a result of sentence reductions. In fact, by early November 2014, more than 1,000 people had been released as a result of the new penal code.

At the regional level, a debate is underway on alternatives to incarceration for low-level non-violent drug offenders. With the support of the Colombian government, the OAS Inter-American Drug Abuse Control Commission (CICAD) has created a regional working group on alternatives to incarceration, which will make recommendations to the region’s governments in the coming months. The U.S. government is participating in the working group. Other regional governments should recognize the powerful message coming from Washington that its own harsh drug laws have had significant negative consequences that urgently need to be addressed, as well as the need to reverse the long-standing use of mass incarceration in response to drug use and trafficking.