The theme for TNI's 2012 annual report was 'Ideas in Movement'. This reflects TNI's unique capacity to develop critical analysis that supports and is embedded in the struggles of movements for social and environmental justice. 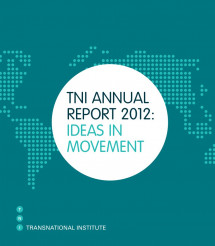 In 2012, the relevance of TNI’s unique location between movements, researchers and policymakers was once more confirmed.

Major political shifts took place on drugs policy and Burmese politics, allowing us to seize the moment and advance our goals.

As Burma opened up following the release of many political prisoners, the easing of sanctions, and the re-entry of Aung San Suu Kyi to public office, TNI helped to support the fragile peace by giving voice to ethnic minorities in the borderland regions where conflict persists. We also deepened our work on the interconnected issues of land rights, natural resources, drugs and the impact of new investment.

TNI also made a significant contribution to the dramatic developments in drug policy in the Americas.. These included the Uruguayan government moving towards state control of the cannabis market, the successful re-adhesion of Bolivia to the international drug convention while demanding respect for the indigenous practice of coca-leaf chewing, and the unprecedented stance of the Organization of American States calling for a profound analysis of the international drug regime. TNI was much in demand from governments to advise on drug control mechanisms consistent with human rights and harm reduction, one of our key objectives.

TNI produced abundant accessible and high-quality research on ‘land grabbing’ and what is driving it. Our work highlights not only land, but also water and forests, seized by players including local elites, European banks and pension funds.

We produced an influential publication, Profiting from Injustice, exposing the dubious and expanding business of legal arbitration of lawsuits brought by international corporations against national governments. It sparked an important internal debate among international arbitration lawyers just as it captured the interest of Southern governments. This pioneering report was part of our broader objective to expose the ‘architecture of impunity’ within which transnational corporations operate. One major outcome of this work was the launch at the Rio+20 People’s Summit of a global campaign for legally binding obligations for transnational corporations ‘to do no harm’.

In response to the depressingly persistent crisis in Europe, and the undemocratic austerity responses to it, TNI began new work to help pan-European movements develop strategies, reinvigorate an alliance of progressive European economists, support youth organised through Occupy and the Indignados and encourage trade unions to reclaim a say in the economic governance of Europe.

Increasing our outreach was an overall strategic objective for TNI in 2012. We embarked on an ambitious experiment with e-learning, launching a course on participatory democracy – a subject on which TNI has accumulated much expertise. The course attracted an astonishing 1,472 people, mainly from Africa. We stepped up our social media presence and overhauled our website, introducing more audio-visual materials and infographics. Site visits have since risen by a third. We produced 32 publications in 2012, and logged media citations in important publications across the world, including Christian Science Monitor, CNN, LA Times, Die Zeit, Il Manifesto, the Guardian, Trouw, Het Parool and Bangkok Post.

TNI is very proud of what our small team of 18 people – supported this year by 4 volunteers, 4 interns, some 41 freelance workers, and over 100 collaborating organisations worldwide – can achieve within a very tight budget. The institute managed to raise its income by 18% on 2011, which enabled us to increase the hours of our existing staff by 0.8 full time equivalent (FTE) to 13.44 FTE while just balancing our budget (see page 42).

We are convinced that an institute like ours has never been as well placed to do what we do – provide empowering information which can support a critical mass working for real transformation in the public interest. We wish we could do even more but without your support this will be impossible. Our deepest wish is that this report will inspire you to support TNI in whatever way you can. We need funds – our future is by no means certain. Please donate whatever you can through our website, contacting our office, leaving a legacy in your will or inviting us to submit a grant application. Whatever is within your means, your support makes a crucial difference to our capacity to put ideas into movement.

Fiona Dove, Executive Director
Dr Susan George, President of the Board of Directors