Asia and Finance Capital: From the Japanese bubble to China’s financial time bomb

This paper dissects the Japanese bubble economy in the late 1980’s and early 1990’s and the Asian Financial Crisis in 1997-98 and shows how they shaped Asia’s capacity to deal with and respond to the 2008 global financial crisis. It looks at how China emerged seemingly unscathed, but warns that the inroads of speculative financial capital into China and East Asia along with ongoing problems of over-production means that a future financial crisis is highly probable. 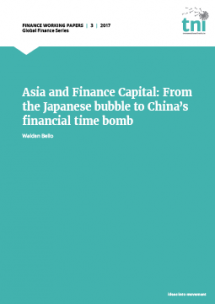 About asia and finance capital: from the japanese bubble to china’s financial time bomb

Ten years after the 2007-2008 global financial crisis, the US is stuck in an uncertain recovery and Europe is mired in stagnation. The BRICS, the so-called “emerging markets” grouping composed of China, India, Brazil, Russia, and South Africa, have failed to step up to the plate to replace Europe and the United States as the engines of the global economy. The world, it is now becoming clear, is now in the grip of long-term stagnation, with occasional and short-lived sparks of growth of some parts of the global economy.

It seems only yesterday that East Asia had the reputation of being the home of “miracle economies.” That era is long gone. Asia was the site of two major financial crises in 30 years, the collapse of the what was called the Japanese “bubble economy” in the late 1980’s and early 1990’s and the Asian Financial Crisis of 1997-98. In retrospect, these two debacles were key moments of the volatile roller coaster known as “financialization,” or global capitalism’s increasing recourse to speculative investment rather than productive investment to stave off a crisis of profitability brought about by a global crisis of overproduction.

The collapse of the bubble economy in the late 1980s, from which Japan has not recovered, came out of the blue. It was unexpected in a world that was still not used to economic troubles brought on by financial crises. However, when another real estate-led bubble inflated in Asia in the mid1990s, with features very similar to the Japanese bubble, alarm bells should have sounded. To most investors and government authorities, however, the massive inflation of assets was simply another aspect of the ‘Asian miracle’. And when the US economy boomed in the early 2000s, on the strength of credit-financed consumer spending and skyrocketing real estate values, the parallels to the run-up to the Asian Financial Crisis should have led the authorities to take strong action.

But again, the danger signs were ignored because it was felt that “this time would be different.” Today, with the world still mired in the stagnation brought about by the global financial crisis, yet another bubble is inflating, this time in China. There are divergent assessments on whether or not China will, in fact, plunge into crisis. But the consensus is that if it does, the global economy into which China has become integrated as the world’s “manufacturing center” will not escape the waves triggered by the financial earthquake. Faced with this prospect, will the world respond differently than it did to the three previous crises?