While tens of thousands of refugees have died fleeing terrible violence and hardship to get to Europe, not everyone has lost out. This report exposes the military and security companies that have profited from the tragedy, winning contracts to provide the equipment to border guards, the surveillance technology to monitor frontiers, and the IT infrastructure to track population movements. 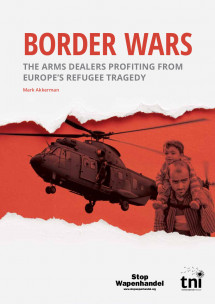 Please note: This report was followed up with a briefing update in December 2016 - Border Wars II

The refugee crisis facing Europe has caused consternation in the corridors of power, and heated debate on Europe’s streets. It has exposed fundamental faultlines in the whole European project, as governments fail to agree on even limited sharing of refugees and instead blame each other. Far-right parties have surged in popularity exploiting austerity-impacted communities in putting the blame for economic recession on a convenient scapegoat as opposed to the powerful banking sector. This has been most potently seen in the UK, where leaders of the ‘Leave EU’ campaign unscrupulously amplified fears of mass migration to successfully mobilise support for Brexit. Refugees fleeing terrible violence and hardship have been caught in the crossfire; forced to take ever more dangerous routes to get to Europe and facing racist attacks in host nations when they finally arrive.

However there is one group of interests that have only benefited from the refugee crisis, and in particular from the European Union’s investment in ‘securing’ its borders. They are the military and security companies that provide the equipment to border guards, the surveillance technology to monitor frontiers, and the IT infrastructure to track population movements.

This report turns a spotlight on those border security profiteers, examining who they are and the services they provide, how they both influence and benefit from European policies and what funding they receive from taxpayers. The report shows that far from being passive beneficiaries of EU largesse, these corporations are actively encouraging a growing securitisation of Europe’s borders, and willing to provide ever more draconian technologies to do this.

Most perverse of all, it shows that some of the beneficiaries of border security contracts are some of the biggest arms sellers to the Middle-East and North-African region, fuelling the conflicts that are the cause of many of the refugees. In other words, the companies creating the crisis are then profiting from it.

Moreover they have been abetted by European states who have granted the licences to export arms and have then granted them border security contracts to deal with the consequences. Their actions are also in the framework of an increasingly militarised response to the refugee crisis by the European Union.

Under the banner of ‘fighting illegal immigration’, the European Commission plans to transform its border security agency Frontex into a more powerful European Border and Coast Guard Agency. This would have control over member states border security efforts and a more active role as a border guard itself, including purchasing its own equipment. The agency is backed up by EUROSUR, an EU system connecting member and third states’ border security surveillance and monitoring systems.

Militarisation of border security is also demonstrated by the military objectives of the ‘European Union Naval Force – Mediterranean Operation Sophia’ (EUNAVFOR MED) as well as the use of military on many borders, including Hungary, Croatia, Macedonia and Slovenia. NATO naval missions in the Mediterranean are already actively assisting EU border security.

Meanwhile, countries outside the EU are being pushed to take up a role as outpost border guards to try to stop refugees from reaching the EU borders. The recent EU migration deals with Turkey, which have been severely criticised by human rights organisations, deny refugees access to Europe and have resulted in more violence against them.

The report shows that:

Collectively the evidence shows a growing convergence of interests between Europe’s political leaders seeking to militarise the borders and its major defence and security contractors who provide the services. But this is not just an issue of conflicts of interest or of profiteering from crisis, it is also about the direction Europe takes at this critical moment. More than a half century ago, then US President Eisenhower warned of the dangers of a military-industrial complex, whose power could “endanger our liberties or democratic processes”. Today we have an even more powerful military-security-industrial complex, using technologies that point outwards and inwards, that right now are targeted at some of the most vulnerable desperate people on our planet.

Allowing this complex to escape unexamined poses a threat to democracy and to a Europe built on an ideal of cooperation and peace. As Eisenhower put it: “Down the long lane of the history yet to be written... this world of ours, ever growing smaller, must avoid becoming a community of dreadful fear and hate, and be instead, a proud confederation of mutual trust and respect.”