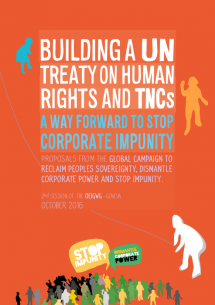 About building a un treaty on human rights and tncs

In June 2014, the Human Rights Council adopted resolution 26/9 on the elaboration of an international legally binding instrument on transnational corporations (TNCs) and other business enterprises with respect to human rights. It has been a historic achievement after decades of discussions and failed attempts within the United Nations. Such an instrument has the potential to substantially promote the pro- tection and fulfilment of human rights in the long-term and on a global scale. It can contribute to ending the impunity that TNCs routinely enjoy for their human rights violations, especially in countries of the Global South, and to ensuring access to justice for people affected by their activities.

This publication contains six points for consideration of the 2nd Session of the “Open-ended intergovernmental working group on transnational corporations and other business enterprises with respect to human rights” (OEIGWG) taking place in Geneva during October 24-28, 2016. The six points were presented by the Global Campaign to Reclaim Peoples Sovereignty, Dismantle Corporate Power and Stop Impunity (Global Campaign) as written submissions and as a contribution to the work of the OEIGWG. They express in their diversity the conviction that such a legally Binding Instrument is essential for two dimensions of the Campaign’s work: to end corporate impunity and address the systemic power of TNCs which has reached unprecedented impacts on the daily lives of affected communities.

Officially launched in 2012, the Global Campaign is a network of over 200 social movements, networks, organisations and affected communities resisting the land grabs, extractive mining, exploitative wages and environmental destruction of transnational corporations (TNCs) in different global regions particularly in Africa, Asia and Latin America. It is a peoples global structural response to unaccountable corporate power which provides facilitation for dialogue, strategizing, exchang- ing information and experiences, acting as a space for visibility of resistance and deepening of solidarity. The Global Campaign is actively involved and has facil- itated the gathering of dozens of delegates in Geneva for a week of high profile mobilization during the Human Rights Council session in June 2014, July 2015 and October 2016, to demand new binding norms on human rights and TNCs.