Busting the myths around the Energy Charter Treaty A guide for concerned citizens, activists, journalists and policymakers

Amidst growing concerns that the Energy Charter Treaty (ECT) undermines urgent climate action, and a growing backlash against the treaty, its profiteers are spewing propaganda, promoting falsehoods about how the ECT attracts clean investment and how its 'modernisation' will fix any flaws. Cut through their rhetoric with our new myth-busting guide. 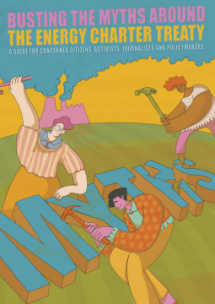 About busting the myths around the energy charter treaty

Download the full guide here or read the longread article in English or Spanish.


Opposition to the ECT is growing rapidly. In October 2020, the European Parliament voted to end the ECT’s protection for fossil fuels. In November, 280 parliamentarians called on the European Commission and EU members to “explore pathways to jointly withdraw”. In December, over 200 climate leaders and scientists echoed that demand calling the ECT “a major obstacle” to the clean energy transition. Behind the scenes in the Council, EU member states like France, Spain, and Luxembourg, too, have raised the withdrawal option if the ECT cannot conform to the Paris Climate Agreement. Belgium has even asked the European Court of Justice if the ECT is at all in line with EU law.

But powerful interests are gearing up to defend the treaty – and even expand it to new signatory states, particularly in Africa, Asia and Latin America. These interests include the fossil fuels lobby, which is keen to keep its powerful legal privileges; lawyers, who make millions arguing ECT cases; the ECT Secretariat, which has close ties to both industries and whose survival depends on continuation of the treaty – and the list goes on.

This guide aims to help activists, concerned citizens, journalists and policymakers confront pro-ECT propaganda. It identifies the ECT’s defenders and their arguments, and offers deeply researched counter-evidence to the following claims: