Cannabis in Indonesia Patterns in consumption, production, and policies

Cannabis use has never posed major problems in Indonesia, yet prohibitionist policies prevail. Despite the high prevalence of cannabis use, local or national discussions on cannabis policies are nearly non-existent, exacerbated by strong anti-drug views and public institutions' failure to design and implement comprehensive policies based on evidence. 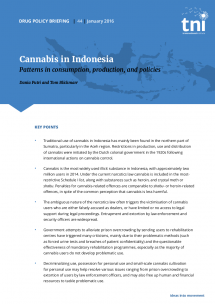 About cannabis in indonesia

Note: This briefing was originally written and published in English in January 2016, and subsequently translated to and published in Bahasa Indonesia in February 2017. Following further inquiries and recent developments, some details in the document are no longer accurate, such as the following:   KEY POINTS: