Carbon Trading - How it works and why it fails

This accessible, well-researched book provides a devastating critique of both the theory and practice of carbon trading, which lie at the heart of global climate policy. 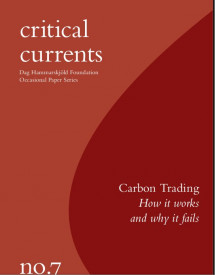 About carbon trading - how it works and why it fails

Carbon trading lies at the centre of global climate policy and is projected to become one of the world’s largest commodities markets, yet it has a disastrous track record since its adoption as part of the Kyoto Protocol.

Carbon Trading: how it works and why it fails outlines the limitations of an approach to tackling climate change which redefines the problem to fit the assumptions of neoliberal economics. It demonstrates that the EU Emissions Trading Scheme, the world’s largest carbon market, has consistently failed to  ́cap ́ emissions, while the UN’s Clean Development Mechanism (CDM) routinely favours environmentally ineffective and socially unjust projects. This is illustrated with case studies of CDM projects in Brazil, Indonesia, India and Thailand.

UN climate talks in Copenhagen are discussing ways to expand the trading experiment, but the evidence suggests it should be abandoned. From subsidy shifting to regulation, there is a plethora of ways forward without carbon trading – but there are no short cuts around situated local knowledge and political organising if climate change is to be addressed in a just and fair manner.

The new book is published by the Dag Hammarskjöld Foundation (www.dhf.uu.se) as part of its Critical Currents series.

"Anyone who still thinks that creating a carbon casino can solve our climate crisis owes it to themselves to read this book. The most convincing and concise challenge to the green profiteers yet."
Naomi Klein, author, the Shock Doctrine

"Carbon trading is a scandalous story of economic dogma, government-business collusion, windfall profits, and promotion of emissions-intensive growth, compounded by speculative sub-prime trading and creation of divisions within vulnerable communities. This incisive analysis demolishes many myths and argues for sustainable solutions to the climate crisis."

Praful Bidwai, Delhi-Based journalist and author of An India that can Say Yes: a Climate-Responsible Development Agenda for Copenhagen and Beyond

Chapter 1 »
introduces carbon trading, how it works and some of the actors involved.

Chapter 2 »
explores the origins and key actors involved in building the architecture of emissions trading.

Chapter 3 »
examines the performance of the EU ETS and finds that it has generously rewarded polluting companies while failing to reduce emissions. Many of the scheme’s fl aws, from the overallocation of permits to pollute onwards, are found to be fundamental to the cap and trade approach more generally.

Chapter 4 »
outlines the performance of the CDM and looks at four case studies of CDM projects in Thailand, India, Indonesia and Brazil; it argues that off sets projects, even those that promote renewable energy, will not be a solution to climate change.

Chapter 5 »
outlines what could work and ways forward for political organising around questions of climate change.

"Anyone who still thinks that creating a carbon casino can solve our climate crisis owes it to themselves to read this book. The most convincing and concise challenge to the green profiteers yet."
- Naomi Klein, author, the Shock Doctrine

"This book is an invaluable contribution to understanding the pitfalls of relying on the carbon markets to save the world's poor and the planet."
- Meena Raman, Third World Network

“The transition to a post-oil model is inevitable but instead of starting this process, it is delayed by barriers and traps such as the carbon market. This book teaches us how this barrier works and what there is behind this new trap of green capitalism. It is obligatory reading for all who fight for a post-oil civilisation.”
- Ivonne Yanez, Oilwatch South America