Three political tendencies have emerged in response to land grabbing that are shaping the global debate and the potential future trajectory of land governance. 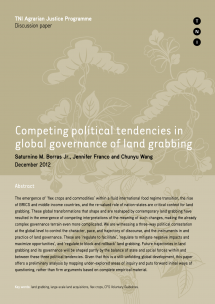 About competing political tendencies in global governance of land grabbing

The emergence of ‘flex crops and commodities’ within a fluid international food regime transition, the rise of BRICS and middle income countries, and the re-valued role of nation-states are critical context for land grabbing. These global transformations that shape and are reshaped by contemporary land grabbing have resulted in the emergence of competing interpretations of the meaning of such changes, making the already complex governance terrain even more complicated.

We are witnessing a three-way political contestation at the global level to control the character, pace, and trajectory of discourse, and the instruments in and practice of land governance. Theserabbing.

Future trajectories in land grabbing and its governance will be shaped partly by the balance of state and social forces within and between these three political tendencies. Given that this is a still-unfolding global development, this paper offers a preliminary analysis by mapping under-explored areas of inquiry and puts forward initial ways of questioning, rather than firm arguments based on complete empirical material.