The radical citizens' movement and party, Barcelona en Comú, has a goal of democratizing the relationship between civil society and city institutions by transforming the traditional structures of political parties and creating new formsof democratic political participation. Through the study of one of the city's many neighbourhood assemblies, Zelinka examines whether it is possible for a political organization to be movement and institution at the same time and what kind of challenges, conflicts and opportunities emerge through this undertaking. 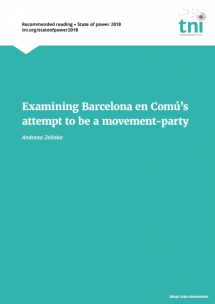 About examining barcelona en comu&#039;s attempt to be a movement-party

When the massive protests that occupied public squares in Spain (known as 15M) ended in 2011, many activists argued that real change could only occur if they took over political institutions. So in 2015 new municipal candidates set out to defend the claims and practices made during 15M within public institutions throughout the territory of Spain. In 2014 a group of social and political activists in Barcelona, Guanyem Barcelona, set the goal to collect 30,000 signatures from city residents supporting their participation in the municipal elections in 2015. The signatures were collected rapidly and the citizens’ platform Barcelona en Comú was formed through a confluence of different political organizations.

Against all odds, they won the elections and Ada Colau became the new mayor of the city. Ever since, Barcelona en Comú has formed a minority government in the city hall of Barcelona.  Barcelona en Comú’s goal is to democratize the relationship between civil society and city institutions by transforming the traditional structures of political parties and creating new forms of democratic political participation. Based on the idea of radical democracy, they seek to establish a co-production of public politics and a co-responsibility for political decision-making. Central to this idea is, thus, a new kind of institution, a so-called movement-party. But is it possible for a political organization to be movement and institution at the same time? Which kind of challenges, conflicts and opportunities emerge through this undertaking? And how do new institutions behave?

There are two important organizational and ideological developments within Barcelona en Comú to be considered in order to answer these questions. The first is the shift to the local, namely the integration of and emphasis on political engagement of ordinary citizens. As a result of the M15 and previous struggles,deliberative practices were already widely established. Thus, the movement was able to go beyond established activist circles, mobilize the citizenry, reject the participation of political parties and introduce an open-structured network. Internal organizational principles of horizontality, self-organization, direct or participatory democracy and diversity were central. The process sought to activate the social and political capacities among citizens and the neighbourhoods’ social fabric. This was done within public assemblies, first on the squares and then in the neighbourhoods. The practice survived the occupations of 15M and is now an integral part of Barcelona en Comú.

Asamblearismo is considered one of the most important tools of political participation among political actors of Barcelona en Comú. It aims at creating consensus through discussions in which each voice is equally represented. Through encounter, reflection and discussion of issues of public concern, a process of collective engagement and decision-making is initiated. In the spirit of the municipalist movements, the shift to the local also refers to the specific local issues people from neighbourhoods face while living in the city. Their capacity to identify problems as well as propose solutions concerning issues such as infrastructure, working hours, housing evictions is crucial.

Of course, the discussions implicitly understand the broader context of government decisions and (geo-)political maneouverings and therefore include a critique on austerity measures, democratic deficits and authoritarianism. This is represented in the claim for the right to the city, ‘not as a right to that which already exists, but as a right to rebuild and re-create the city (…) that eradicates poverty and social inequality (...)’. In other words, the right to self-determination and engagement in the creation of, what Arjun Appadurai calls, collective horizons.

To provide for this right, the process of creating the government’s municipal and districts’ plan (Pla d‘Actuació Municipal (PAM) and Plans d‘Actuació dels deu districtes de la ciutat (PAD) was designed to be as participative as possible. Over one-and-a-half months around 300 assemblies were held all over Barcelona. Experts and neighbours, youngsters and seniors participated equally in the assembly to create concrete proposals for their common urban space.

The shift to the present

Barcelona en Comú entered electoral politics with the objective to change the daily life of institutions.  They try to incorporate social movements, neighbourhood associations and assemblies in the daily routine of institutional politics. Further, they are now making alliances, initiating collaborations and supporting corporations and agencies whose interests coincide with the interest of the citizenry and not those of the political or financial elites. Their goal is to reinforce the creation of urban commons which means to strengthen social bonds and a sense of community in the city. As Theodoros Karyotis puts it: ‘Ultimately, it can become a place of resistance and self-determination, a place of inclusion; inclusion not only in the sense of formal rights granted by an instance of power, but in the sense of full participation of all different identities and subjects in political, economic and social life.’

However, proposing new forms of democratic practices makes visible the tensions between the ideal of the political vision and the reality of political practice. According to Jessica Greenberg, democracy is always profoundly contradictory and flawed when measured against idealized moments and normative expectations. Her study on the post-revolutionary Serbian Youth movement after the overthrow of Milošević shows the challenges between being a former political activist and becoming an official working in state institutions. Trying to live up to one’s own and other’s expectations and ideals, participants experienced deep frustrations about the political reality of democracy. Thus, Serbian students “articulated their politics within a pragmatic present that was inevitably incomplete, partial, contradictory and disappointing”. Their management of the contradictions of democratic practices resulted in an ‘anti-utopian pragmatic politics of the present’.

Against this backdrop, the second political innovation that can be observed within Barcelona en Comú is the shift to the present. Political actors in city hall have to constantly manage their own expectations and frustrations and those of fellow militants in other areas of the organization.  It is soon apparent that democratic praxis is inherently flawed as it can only approximate to a political ideal. Actors of Barcelona en Comú have therefore understood that there is no reaching for a utopian future when the questions of equitable redistribution and modes of (re-)production are seemingly answered by (traditionally) one established party. Their realization is that there is only an everyday struggle of (re-)creating the conditions of life and coexistence for which the present is the battleground. Through constant negotiation of internal and external organizational principles and the support of sustainable policy making, democratization can only be achieved in the long-term through day-to-day actions.

Barcelona en Comú is a heterogenous political organization made up of people coming from diverse political and social backgrounds and social movements. For members it is perceived as a citizens’ platform to listen to and integrate city inhabitants in bringing about change from within civil society. Only a minority of its members had previous experiences in institutional politics, such as those from Iniciativa per Catalunya Verds. The emphasis on individual political participation during 15M was developed further within Barcelona en Comú as a system of confluence, where every person has an equal voice within the political organization, no matter from which organization they originally come from.

There are around 1,500 people in the registry of activists of Barcelona en Comú which constitutes the general plenum. The plenum is a space of political decision-making within the political organization. In the core of the organization there is the municipal group and the general coordinating group. The latter includes representatives of all districts, thematic groups, commissions and neighbourhoods as well sympathizers. Within the city hall, however, it is the municipal group which has executive powers. The group is formed by the mayor, city councillors and secretaries.

For militants of the assembly the difference between general coordination and municipal group is not always clear. However, the municipal group represents the the top levels of the political organization, as these are the people who were elected from the assemblies into office. Then, there are the thematic groups (working on different topics such as gender and sexual diversity, education etc.) and territorial assemblies of the districts. The latter are organized by districts which encompass different neighbourhoods.

One of them is the city center of Barcelona called Ciutat Vella (old town) which includes El Raval, La Barceloneta, el Gòtic and Sant Pere, Santa Caterina i la Ribera. In these assemblies, neighbourhoods matters and actions are discussed, but the debates mostly evolve around internal organizational issues and the relation between the assembly and the institution (municipal group). In spite of the fact that the neighbourhood assembly is the most local entity, it is exactly here where controversial debates about political strategies and organizational principles most often take place