The current economic crisis is merely triggered by COVID-19, argues Jan Douwe van der Ploeg. The real causes reside in the specificity of today’s global economic structure and especially in three key features that lie at its core. In this policy brief he discusses these key features with reference to farming and food and presents building blocks for the construction of resilient alternatives to the current crisis. 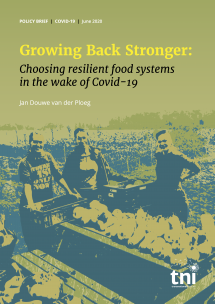 About growing back stronger

The outbreak and subsequent spread of COVID-19 is not the first pandemic in human history, neither will it be the last. There have been pandemics throughout history and many have had a horrifying impact. In this respect COVID-19 is far from unique. The exceptionality, however, of the current pandemic resides in how quickly it has translated, at a global scale, into a devastating political-economic crisis. Spanish Influenza (1918-1919) was arguably far more lethal, but it only brought about a minor decrease in economic activity. Garrett provides data on the reduction in Gross National Incomes in the years following the outbreaks of Spanish Flu and concludes that ‘society as a whole recovered from the 1918 influenza quickly’.

Currently, the world is experiencing a massive paralysis, a sweeping growth of unemployment, a negative growth level and a sky-high bill that most probably will be paid by the poor. The domains of farming and food are rapidly falling into disarray: farmers’ incomes are going down nearly everywhere, the situation of rural workers (especially migrant workers) is disastrous, harvests are being (partially) lost, some parts of food provisioning are interrupted while the number of hungry people is increasing, food prices are rising in several countries and many people are closer to starvation. While these impacts will be experienced differently around the world, major direct and indirect effects can be anticipated in all countries, including the Netherlands.

The disastrous economic impact of COVID-19 is due to its interaction with economic systems that differ radically from those of the post-World War I period. In this respect there are three key structural differences.


Together these interrelated features, which have been strengthened by neo-liberal policies from the mid-1980s onwards (also and probably especially in the Netherlands), explain the current economic crisis. The COVID-19 tragedy is merely a trigger. The real causes reside in the specificity of today’s global economic structure and especially in the three features, mentioned above, that lie at its core. As a global leader in intensive agriculture, the Netherlands has also played an important role in strengthening some of these dynamics and shaping the modern food system.

These features will be discussed here with reference to the domain of farming and food. Food and farming carry the danger of becoming an Achilles heel during the current crisis. Food scarcities in the first half of 2008, widespread rioting and the Arab Spring remind us of the potential explosiveness of malfunctioning food systems. The necessity to consider food and farming is made even more urgent as the rebuilding of food economies intersects with other pending issues, such as the needs to reduce our use of fossil fuels, halt or reverse global warming and to reduce chronic levels of hunger.