Impunity Inc. Reflections on the “super-rights” and “super-powers” of corporate capital

Forty years after Salvador Allende denounced corporate power at the United Nations General Assembly (December 1972), millions of people all over the world are involved in struggles against the human rights violations and the social and environmental injustice generated by transnational corporations. 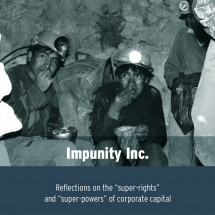 Working together or in parallel, in multiple ways, and in all sectors of the economy, people are defending their territories, seeds, water, forests, food, biodiversity, health, culture, etc., from the aggressive actions of the transnational corporations, which expand their power in a system of “accumulation by dispossession.”

Impunity Inc. is a report produced as part of the Global Campaign to Dismantle Corporate Power and Stop Impunity. Through three case studies, it analyses the “super-rights” and “super-powers” of transnational corporations and exposes the architecture of impunity which privileges TNC operations over people’s basic rights.

The Report was launched during the Vienna +20 Civil Society Conference and highlighted key recommendations which are incorporated in the CSO Conference Declaration. The calls for Binding Obligations and Regulation of TNCs and a World Court of Human Rights where violations and crimes of TNCs can be judged and sanctioned are particularly significant.

This report was produced as part of the Global Campaign to Dismantle Corporate Power and Stop Impunity. Through three case studies, it aims to provide inputs for reflection on the “super-rights” and “super-powers” of transnational corporations.

Chapter 1 describes the abuses and violations of fundamental labour rights taking place on a daily basis in the garment factories in Morocco which make clothes for export to Europe, affecting young women in particular. It also looks at the extent to which successive policies, from the French colonial administration to the present day, including those imposed by the World Bank and the International Monetary Fund, have dismantled the country’s traditional agricultural base. For millions of people in the rural areas of Morocco, this process has meant the loss of their livelihoods, obliging them to accept long hours of work and low wages - that in most cases do not cover workers’ basic needs - in export-oriented garment factories working for companies like Spain’s Inditex. This is occurring despite the discourse on corporate social responsibility – now discredited and obsolete – and with the backing of the Association Agreement (AA) between the EU and Morocco, where there is no sanction mechanism to address the violations of fundamental rights. Through this Agreement, Lex Mercatoria and the protection of corporate interests continue to take priority over the rights of human beings.

Evidence of a similar situation is found in the case of Central America, where the profound asymmetry that characterises the signing of the AA between this region and the EU is highlighted. The guaranteed impunity examined here is that of the Spanish company Pescanova in Nicaragua. The case study focuses on its negative impacts in terms of insecure working conditions, the displacement of local fisherfolk and pollution of the environment in the region. The company’s dominant position in the shrimp farming sector is emphasised, describing how it has managed to secure most of the area awarded under concession for shrimp production in the country. Its operations not only restrict the traditional fishing communities’ access to fishing grounds, but also the local Nicaraguan population’s access to food in the affected area. The fact that this agreement was signed recently (June 2012) demonstrates that the European Union has not changed its voracious trade policy over the years. Although human rights, workers’ rights and sustainability are mentioned in the agreement, any attempt to demand that they be respected reveals that they are merely empty statements of principle that carry no weight compared to the chapter on trade and investment. The AA therefore provides a guarantee that this dramatic situation of impunity will continue.

Chapter 2 delves into the implications of the EU’s substantial dependence on the import of increasingly strategic raw materials from impoverished countries. It describes the structure of exports from South America and Africa to Europe and how this keeps these countries in the role of primary commodity exporters and thus in poverty. Emphasising that raw materials are important to capital not only from the metabolic point of view but also on the business side, the chapter describes how European companies are consolidating their monopoly position and their control of the international trade in raw materials. They use Europe as a political platform to ensure that their interests are defended through its “raw materials diplomacy,” but it is also the destination for their products. This is why they are particularly interested in maintaining the model of consumption and capitalist production that currently prevails in the EU. By examining Glencore’s mining operations in Colombia, Bolivia and the Democratic Republic of Congo, on which the EU’s metabolism depends, the chapter describes how a giant transnational like this is able to obtain enormous profits while also provoking serious social and environmental conflicts. A review of its activities in MERCOSUR countries, where it has taken over thousands of hectares of fertile land, provides evidence of Glencore’s control over practically the entire chain of production, under the “vertical integration” model imposed by agribusiness. When Free Trade Agreements, EPAs and AAs are placed under the microscope as they relate to this company, it becomes clear how they benefit it and only serve to increase its hegemony and impunity. Finally, the chapter describes Glencore’s operations in different areas of the economy, focusing on its role in financial speculation on commodities.

Through up-to-date information on the implementation of the infrastructure mega-projects in South America (IIRSA-COSIPLAN), Chapter 3 concentrates on the physical foundations that support trade liberalisation, and the economic, social and environmental cost of this for the people. It also assesses the additional contamination of the infrastructure projects through their increasing financialisation, and emphasises the role played here by European capital. The chapter reveals the existence of a wider project, whose purpose is to enshrine markets as the means through which infrastructure is not only financed but its disposition decided. It also uncovers another worrying fact: even though the foundations are starting to be laid for counter-hegemonic power through initiatives like UNASUR, the territorial reorganisation driven by capital continues to advance as before. A separate section is devoted to the mega-dams being built on the River Madeira in the Amazon, with the involvement of Banco Santander, GDF-Suez, Abengoa, Voith, Siemens and other European companies. The two cases examined here represent a testing ground for the construction of dozens of other mega-dams in the Amazon. They are already demonstrating the extent of the social and environmental disaster that this will cause, as well as the systematic violation of workers’ rights and human rights in general.

“We are faced by a direct confrontation between the large transnational corporations and the states. The corporations are interfering in the fundamental political, economic and military decisions of the states. The corporations are global organizations that do not depend on any state and whose activities are not controlled by, nor are they accountable to any parliament or any other institution representative of the collective interest. In short, all the world political structure is being undermined. The large transnational firms are prejudicial to the genuine interests of the developing countries and their dominating and uncontrolled action is also carried out in the industrialized countries, where they are based. This has recently been denounced in Europe and in the United States and resulted in a US Senate investigation. The developed nations are just as threatened by this danger as the underdeveloped ones. It is a phenomenon that has already given rise to the growing mobilization of organized workers including the large trade union organizations that exist in the world. Once again the action of the international solidarity of workers must face a common enemy: imperialism.”
Speech by Chilean President Salvador Allende to the United Nations, 4 December 1972

Forty years have gone by since Allende spoke these words. His message seems relevant today more than ever. Throughout this report, the aim has been to reveal the architecture of impunity that protects European capital in particular, although the reflections it offers could be extrapolated to all the transnational corporations around the world, including those based in the emerging economies.

As Berrón and Brennan point out (2012, 2), we need to strengthen a “social response to build counter-power, which identifies the different levels of resistance and can bring them together in greater coordination.” This report has sought to contribute to this by linking the spheres of the real-real economy, infrastructure mega-projects and financialisation with an analysis of the operations of transnational corporations and trade agreements. It has also underlined the need to remain vigilant and monitor the physical scaffolding which is put in place to enable the agreements in FTAs and AAs to become reality, as described in the case of IIRSA.

It is also important to emphasise that in the context of the growing financialisation of the global economy, the example of Glencore’s activities is only the tip of the iceberg which must be resisted by civil society organisations that have traditionally denounced the transnationals. Until now, their work has mainly focused on the social, environmental and labour impacts produced by these companies in the real economy. Now this work needs to be combined with a focus on the banking sector. The corporations are beginning to act directly in all spheres of the economy, including the system that allows them to engage in financial speculation (Teitelbaum 2012, 8). There, they operate in a world where they no longer need FTAs, EPAs or AAs, in a financial system that is completely de-regulated. This is why it is necessary not only to understand how these companies operate but also to look for new ways to respond.

As Hildyard (2011) puts it, a “ well-functioning market ” is in fact the working of a system placed at the service of private interest , a system that makes it legal and legitimate for one person to accumulate wealth at another’s expense. The market is neither the place nor the means to raise funds to serve the public interest. Financial derivatives are instruments that only intensify the pernicious and anti-democratic character of the market. Therefore, it is not a question of making this system “a bit fairer.” It must be dismantled altogether.

With the current multidimensional crisis, as foreseen by Allende, corporate power is also digging its claws into the flesh of people in the rich countries. As well as controlling their consumption patterns and destroying their cultural and natural heritage for decades, it has now orchestrated an attack on public services and the social and labour rights of these peoples. Fortunately, an increasing number of protests are taking place in these countries. Examples of the struggle to defend rights and reject public spending cuts are now evident all over Europe. In this context, we need to multiply alliances and coordinate resistance and local campaigns. The success of every specific act of resistance is reinforced if it is coordinated at the global level, “ to prevent [TNCs] from moving to other places where [they] will try to apply the same strategy ” (Berrón and Brennan 2012, 2).

Through initiatives such as the Global Campaign to Dismantle Corporate Power and Stop Impunity, the networks campaigning against free trade, and those carrying out the important task of monitoring the financial sector and the “green” economy, we must unite all our forces and organise against the “super-rights” and “super-powers” of the large corporations. One key component of this will be to put in place an International Peoples’ Treaty, with the aim of proposing economic and political alternatives, as well as establishing binding legal mechanisms and an International Tribunal to enforce them, ensuring that corporations will be held accountable for their actions and punished for their crimes against society and the environment. We have no other choice. Neither do we have much time.