The recent political and economic liberalization in Burma/Myanmar, while indicative of some positive steps toward democratisation, has increased foreign and domestic investments and geared the economy toward industrialisation and large-scale agriculture. Land governance procedures and implementation tend to favour the more powerful and well-connected, with little protection mechanism for the majority smallholding farmers in the country. 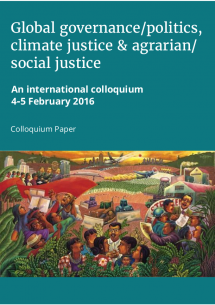 The recent political and economic liberalization in Burma/Myanmar, while indicative of some positive steps toward democratisation after decades of authoritarian rule, has simultaneously increased foreign and domestic investments and geared the economy toward industrialization and large-scale agriculture. In rural areas, new institutional frameworks governing land, including a new Farmland Law (2012) and Vacant, Fallow and Virgin Lands Management Law ( 2012) have effectively created a land market through private land-use property rights and a new registration system with new land administration bodies. In a country permeated by legacies of corruption, coercion and military-linked cronies, land governance procedures and implementation tend to favour the more powerful and well- connected, with little protection mechanism for the majority smallholding farmers in the country.

The Dawei Special Economic Zone (SEZ), in the southern Thanintharyi division of Myanmar, to be developed trilateraly with Thai, Myanmar and Japanese in vestment, is set to become one of the largest industrial zones in Southeast Asia, covering an area of approximately 200km 2 . The project plan includes a deep sea port, industrial estate, power plant and cross-border road and rail link to Thailand. The development of the SEZ, together with land speculation in surrounding areas and other confiscations linked to agricultural concessions, mining and military constructions has been met with collective mobilizations. The paper argues that although resistance against land confiscations are increasingly linked to global trends, such reactions are also responding to an expanding opportunity structure in the national political context.

Collective action in the Dawei area takes advantage of histories of activism linked to democratic movements as well as human rights repertoires, social networks and trainings across the border in Thailand. Smallholding farmers, in alliance with activists, are also contesting land confiscations conducted by the military in the 1990s, encouraged by a greater political liberalization and testing the grounds for protest and engagement with the state. These contestations have implications for democratization and the transition of state-society relations more broadly. Although embedded locally, this process engages with transnational networks and alliances as well as global frameworks such as human rights, livelihoods and sustainable development.

* This paper was published as part of the 2 day Colloquium Global governance/politics, climate justice & agrarian/social justice and selected for republishing on the TNI website. All papers can be found at the website of ISS.