Despite a federal prohibition on marijuana possession, sale, and use, Colorado and Washington recently became the first states to enact laws legalizing the recreational use of this drug. Although the Obama Administration has taken steps to attempt to deal with this evolving situation, we believe the status quo is untenable and Congress must act to provide certainty and a framework for these states moving forward. This report explains the problem and offers a solution. 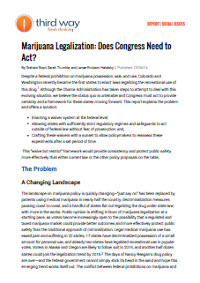 About marijuana legalization: does congress need to act?

This “waive but restrict” framework would provide consistency and protect public safety more effectively than either current law or the other policy proposals on the table.

The next few years will bring a diversity of state approaches to marijuana. In some states, any marijuana activity will remain a crime. In others, decriminalization measures will make personal use of the drug a civil offense like a speeding ticket, subject simply to a low-level punishment like a fine rather than jail time. In many others, a limited exception for those with a medical recommendation will allow some degree of legal regulated use, production, and sale of marijuana. And in a growing number of states, marijuana use will be legal for adults, and marijuana production and sale will be legal for licensed entities. If a state wants to treat marijuana use as a crime, the federal government will continue to cooperate with efforts to ensure their criminal framework is achieving federal public safety goals. If a state creates a sufficiently strict regulatory framework that protects those same federal interests, federal officials should provide assurance that those who play by the rules will not be punished, while partnering with state officials to hold accountable those who don’t. That is exactly what a “waive but restrict” approach would do.

The time for Congress to act is now. In 2016, a new president, and potentially a new party, will be elected to the White House. If Congress has done nothing by then, a new administration could reverse the Obama guidelines, file preemption lawsuits against Colorado, Washington, and any other state that has legalized marijuana by that point, and prosecute anyone who has participated in their markets. On the other hand, a new administration could potentially go even further in the direction of federal non-intervention. If Congress doesn’t act, the next President could unilaterally make major shifts in the federal government’s policy towards states that have legalized marijuana—and what the next policy might look like is anyone’s guess.