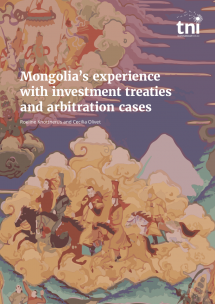 About mongolia’s experience with investment treaties and arbitration cases

Signing international investment treaties (IIAs), in the hope of attracting foreign investment, has been a central strategy for governments looking to improve economic development.

IIAs have been around since 1959, when the first Bilateral Investment Treaty (BIT) between Germany and Pakistan was signed. By the end of 2015 there were 3,286 investment agreements (2,928 BITs and 358 “other IIAs”). “Other IIAs” refer to economic agreements other than BITs that in- clude investment-related provisions, such as investment chapters in free trade agreements (FTAs).

The bulk of these treaties was signed during the 1990s and early 2000s when most governments believed that economic liberalism would bring development. During that period, most developing countries were sold a myth. The idea was that signing investment agreements would help countries attract foreign investment. At the time, there was no awareness of risks involved and what govern- ments were giving up in terms of sovereignty.

Mongolia is no exception. The government signed 43 bilateral investment treaties (BITs), of which 37 are in force. The vast majority of these were concluded between 1991 and 2001. And, almost half of Mongolia’s BITs (17 out of 43) are with countries of the European Union 4 (for further details on Mongolia’s BITs with EU Member States and possibilities for termination see Annex 1).

Mongolia has also been a party to the multilateral agreement Energy Charter Treaty since 1994. The Charter is a multilateral agreement that offers investors in the energy sector similar protections to those encountered in other investment agreements, including the possibility to recur to international investment arbitration. In 2015, European Member State Italy announced its withdrawal from the ECT, out of concern that future energy policy changes might spark a spate of investment disputes.

Today, more than 20 years later, the evidence that International Investment Agreements do in fact deliver on their stated purpose is at best inconclusive. Most research studies carried out by the academic community failed to find a direct correlation between IIAs and attraction of FDI . The experience of many other countries like South Africa, Ecuador , Hungary and Brazil show that the promise of increased foreign investment when signing IIAs has not been fulfilled. Even the European Trade Commissioner Malmström recently admitted that most studies showed no “direct and exclusive causal relationship” between international investment agreements and foreign direct investment .

A recent study about the implications of the signing of Investment Treaties for Mongolia‘s develop- ment reached similar conclusions. It found that despite Mongolia boasting a very liberal investment law protecting the rights and property of foreign investors in the country, as well as very generous tax incentives, including tax exemptions and tax stabilization agreements, it largely failed to attract significant FDI into the country. In addition, what FDI did come into the country only served to cre- ate limited and unregulated employment, while not contributing to substantially increase (domestic) manufacturing - 72.5% of all FDI is in geological prospecting and mining -, and has contributed little to eradicate poverty.