A briefing that explores how a trade agreement currently being negotiated between the US and the EU could open the way to multi-billion euro lawsuits from companies wanting to expand “fracking” for shale gas and oil. 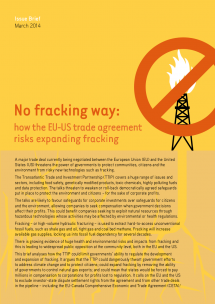 About no fracking way

A major trade deal currently being negotiated between the European Union (EU) and the United States (US) threatens the power of governments to protect communities, citizens and the environment from risky new technologies such as fracking.

The Transatlantic Trade and Investment Partnership (TTIP) covers a huge range of issues and sectors, including food safety, genetically modified products, toxic chemicals, highly polluting fuels and data protection. The talks threaten to weaken or roll-back democratically agreed safeguards put in place to protect the environment and citizens – for the sake of corporate profits.

The talks are likely to favour safeguards for corporate investments over safeguards for citizens and the environment, allowing companies to seek compensation when government decisions affect their profits. This could benefit companies seeking to exploit natural resources through hazardous technologies whose activities may be affected by environmental or health regulations.

There is growing evidence of huge health and environmental risks and impacts from fracking and this is leading to widespread public opposition at the community level, both in the EU and the US.

This brief analyses how the TTIP could limit governments’ ability to regulate the development and expansion of fracking. It argues that the TTIP could dangerously thwart government efforts to address climate change and to protect citizens; could expand fracking by removing the ability of governments to control natural gas exports; and could mean that states would be forced to pay millions in compensation to corporations for profits lost to regulation. It calls on the EU and the US to exclude investor-state dispute settlement rights from the agreement and from other trade deals in the pipeline – including the EU-Canada Comprehensive Economic and Trade Agreement (CETA)

The briefing is a collaboration between ATTAC, the Blue Planet Project, Corporate Europe Observatory, Friends of the Earth Europe, Powershift, Sierra Club and the Transnational Institute.