No Women, No Peace: Gender Equality, Conflict and Peace in Myanmar

There has long been a need for a deeper understanding of the intersections of gender, ethnicity and other identities in peace-building and democratisation. Progress on the rights of women and the participation by women’s organisations in conflict resolution and national reform are vital if sustainable peace and democracy are to be built within the country. 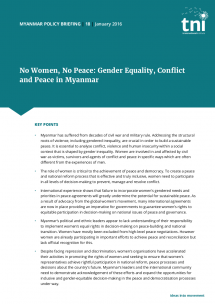 About no women, no peace: gender equality, conflict and peace in myanmar

This briefing explores the gender dimensions and gender impact of conflict in Myanmar. Such information is relatively scarce, and there has long been a need for a deeper understanding of the intersections of gender, ethnicity and other identities in peace-building and democratisation. Progress on the rights of women and the participation by women’s organisations in conflict resolution and national reform are vital if sustainable peace and democracy are to be built within the country.

Decades of civil war and military rule have had a deep impact on the peoples of Myanmar, especially in ethnic nationality areas where most of the fighting has taken place. The reform process initiated by the government of President Thein Sein, a former general and member of the previous military government, has raised hopes that the country will finally move towards a more democratic and inclusive society, and that a sustainable peace can be achieved through a political agreement with ethnic representatives addressing key grievances and aspirations. However, at the beginning of 2016 fighting still continued in ethnic nationality regions in the north of the country, despite the partial signing of a Nationwide Ceasefire Agreement (NCA) in October 2015 and the landslide victory of the opposition National League for Democracy (NLD) in the November 2015 general election. The outcome of both processes is, as yet, unclear.

While conflict continues, the gender implications of such suffering and marginalisation are rarely factored in during discussions or initiatives for national reform. This neglect now has to end. In fact, although men have been the highest casualties in combat, it is very often women in Myanmar who have been the prime victims of conflict, whether through sexual violence, human trafficking and other rights abuses or such indirect consequences as reduced access to clean water and health services, the increase in female-headed households, and the inordinate burdens for women and girls in conflict-zones. Equally unaddressed, women have very often been denied participation in initiatives towards peace, a marginalisation that is reflected in the landscape of national politics. Far from women being a “secondary” or “sectoral” group within society, their equitable participation in national life is one of the most integral challenges in socio-political reform that faces the country today.

Despite such disadvantages, women in and from Myanmar have remained highly active as agents for reconciliation and political change in grassroots and civil society initiatives for peace, community-building and reform over the decades. Their role, however, is very underacknowledged, and, with few exceptions, women have remained notably absent from high-level peace negotiations, both under the Thein Sein government and the preceding regime of the State Peace and Development Council (SPDC: formerly State Law and Order Restoration Council, SLORC). The need is thus urgent to increase awareness of the many difficulties afflicting women and promote the essential role of women if peace is to be established in the country’s new political era. As women activists proclaimed in Myanmar on the International Day of Peace 2015: "No Women, No Peace"

As a matter of priority, it needs to be affirmed that women do have equal rights under a host of laws and protocols to participation in public decision-making about their lives, their communities and countries. These rights are today underpinned by international law and international instruments, including human rights conventions and UN Security Council resolutions. The need now is for these rights to be fully implemented and guaranteed in Myanmar. As a growing body of evidence from peace processes in different countries has shown, when women are represented at all levels of decision-making about peace-building and democratisation, the gender-specific needs of women and men tend to be addressed more equally. Such inclusion is, in turn, an essential factor in the establishment of national stability and reform.

This briefing will start with an overview of the present ethnic and political situation in Myanmar, followed by analyses of the current involvement of women in conflict resolution and national reconciliation in Myanmar. Reference will be made to the significant difference that gender-inclusive peace agreements and peace-building efforts have made in other countries around the world. Then, following an overview of the contemporary landscape, the briefing will make a clear case for the urgent need to have a gender-equitable and inclusive peace process in Myanmar. The briefing will then conclude with recommendations for the promotion of gender awareness and participation of women from all ethnic backgrounds in peace initiatives in the country as a whole.