This paper provides historical background and reports of experiences on the ground to show how land and nature enclosures are central to REDD+, and why it therefore cannot be fixed. 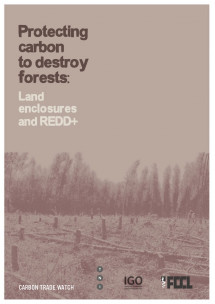 About protecting carbon to destroy forests

This paper provides evidence that REDD+ will not stop forest destruction. Companies and Northern governments sponsor REDD+ projects and REDD-type funds with either public money or the carbon markets to show how they are ‘contributing’ to halt deforestation. However, the underlying causes of deforestation remain untouched and thus, the problem continues to worsen.

Because REDD+ is embedded in the logic that environmental destruction can be ‘compensated’ for somewhere else it acts to reinforce the underlying drivers of deforestation and climate change. It also gives forest destroyers a way to legitimize their actions as environmentally ‘friendly’ or ‘carbon neutral’.

Far from positioning itself as an ally to the many local groups that have preserved forested lands most strongly, REDD+ tends to silence debates about the unjust realities surrounding corporate pressures on land tenure regimes.

Moreover, the categories used to structure modern understandings of territories subordinate indigenous ‘world views’, which invoke a relational understanding of space that includes humans and non-human beings, to rationales of legally-defined rights, environmentalism, and cultural difference (Bryan, 2012).Indeed, in the rush for the ‘stored’ carbon, more lands and territories are being enclosed from people living in or dependent upon forests.

Groups trying to influence REDD+ believe that it could be fixed if independent financial mechanisms outside of the carbon markets were used instead, such as taxes or other public funds. This paper aims to provide a historical background and experiences on the ground in order to further the argument that because land and nature enclosures are central to its operation, REDD+ cannot be fixed.