Report by international mission of 15 parliamentarians, jurists and representatives of human rights, trade union, and popular organizations and networks that travelled to Honduras in mid-March to clarify the context of the assassination of Berta Caceres and to make recommendations to end the culture of impunity affecting human rights defenders in the region. 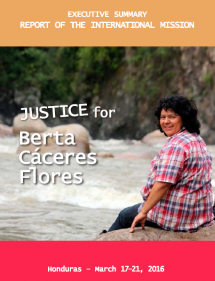 About report of &#039;justice for berta caceres&#039; international mission

The International Mission “Justice for Berta Cáceres Flores”, composed of 15 parliamentarians, jurists and representatives of human rights, trade union, and popular organizations and networks from throughout the world, carried out an intense program of activities in Honduras between 17 and 21 March 2016. Responding to the request of the Civic Council of Popular and Indigenous Organizations of Honduras (COPINH) and the National Network of Women Human Rights Defenders of Honduras, and of an extensive network of international solidarity in support of the Honduran people, it focused on clarifying the context of the brutal murder of the indigenous Lenca leader Berta Cáceres Flores, the night of March 2, 2016, and pushing for the release of the Mexican social leader, Gustavo Castro, wounded in the murder of Berta and retained unjustly by the authorities of Honduras.

On March 21, concluding its stay in the country, the International Mission presented at a press conference in Tegucigalpa the main conclusions and recommendations arising from its meetings with representatives of the Honduran executive, judicial and parliamentary branches, embassies, COPINH and other popular and human rights organizations, as well as the family of Berta Cáceres Flores, Gustavo Castro and his legal team. Among them, the Mission emphasized the weakness of the rule of law manifested in Honduras, with the absence of the slightest respect for democratic principles, fundamental freedoms and human rights, together with a lack of political commitment to end the prevailing impunity that have turned the country into the world’s most dangerous place for defenders of the environment, land, territory and human rights. It noted the ineffectiveness of the Honduran State´s human rights protection system, as well as a prevailing institutional practice that ignores the rights of the victims of human rights violations as active rights holders. It concluded in particular that the life of Gustavo was in danger while remaining in Honduras and that there were no legal reasons to restrict his freedom.

Furthermore, the Mission noted systematic and flagrant transgressions of regional and international human rights, including the rights of indigenous peoples, in the development of hydroelectric, mining, forestry and agro-industrial projects such as Agua Zarca. It noted that the worsening criminalization of COPINH provides evidence of the strong links between the government and companies, like DESA, and funding entities, both national and transnational, that promote these projects in contradiction with the lifestyles and interests of affected communities and territories, a situation that has worsened dramatically in the aftermath of the 2009 coup d’état. It observed an absence of due diligence by these companies and funding entities, and also in relation to the substantial aid granted to the Honduran government by the US, the European Union and its members, and public financial institutions like the World Bank, the Inter-American Development Bank and the Central American Bank for Economic Integration. It also identified a growing process of militarization in the country that far from contributing to public safety is perceived as one of the very sources of increasing insecurity.

The Mission further sought to verify the context in which the assassination of Berta Cáceres and that of Nelson Noé Garcia, another Lenca leader of COPINH shot to death 12 days after Berta, took place, and to support Honduran popular demands for the cancellation of concessions and projects such as Agua Zarca, a hydroelectric dam against whose construction in Lenca territory – in the absence of prior consultation – Berta had been struggling and COPINH continues to struggle, the demilitarization of indigenous territories, and implementation of a law for the protection of human rights defenders. On March 21, concluding its stay in the country, the International Mission presented at a press conference in Tegucigalpa the main conclusions and recommendations arising from its meetings with representatives of the Honduran executive, judicial and parliamentary branches, embassies, COPINH and other popular and human rights organizations, as well as the family of Berta Cáceres Flores, Gustavo Castro and his legal team.

The International Mission formulated 25 recommendations to the State of Honduras and other actors involved in these violations of human rights, such as the European Union, the United States, the company DESA and funding agencies FMO, FINNFUND and the Central American Bank for Economic Integration (BCIE). Among others, the Mission endorsed the demand for an independent investigation of the assassination of Berta Cáceres with the participation of international experts, a contribution that could be made by the InterAmerican Commission on Human Rights (IACHR) in agreement with the government of Honduras. Such an investigation must enable identification of those responsible both materially and intellectually for the assassination of Berta, as well as both state and / or private actors responsible for the threats, harassment and assassinations suffered by COPINH members. It called on the governments of Honduras and Mexico to ensure the immediate and safe departure of Gustavo Castro out of the country, as well as his physical and psychological integrity and respect for his life and human rights.

The Mission also called, in general terms, for and end to the prevailing impunity, privileges, favours, opacity, and democratic restrictions, encouraged by the 2009 coup d’état, in order to achieve effective investigation, prosecution, and punishment of those responsible for human rights violations and to prevent further violations. It further called on the government of Honduras to ensure the necessary measures and provide sufficient financial means for the correct implementation of the Law for the Protection of Human Rights Defenders, Journalists, Social Communicators and Judicial Officials, to end the process of criminalization of civil society organizations, and to resolve in a non-violent and democratic manner, present and future socioenvironmental conflicts.

The International Mission called for the immediate cancellation of the Agua Zarca project and all the concessions imposed in Lenca territory without the prior, free and informed consent of affected communities, as well as others related to hydroelectric dams, mega mining operations, agribusiness and forestry projects, also at odds with environmental sustainability and social acceptance, especially when they are located in indigenous territories. It further called for the demilitarization of Lenca territories, the effective implementation of ILO Convention 169 and the recognition of COPINH as the organization responsible for their community autonomy.

Moreover, the Mission exhorted the Central American Bank for Economic Integration, the Dutch Financial Development Company (FMO) and Finnfund to cancel definitively their support for Agua Zarca and it urged all States and multilateral financial institutions involved in similarly conflictive projects to fulfill their extraterritorial and due diligence obligations, assuming their duty to verify that the social and environmental impacts of their operations are neither harmful nor in violation of the rights of persons, peoples and nature. It recommended investigation of the relation of FMO with the FICOHSA Financial Group and its participation in Agua Zarca, as well as that of the Atala group linked to the 2009 coup d’état.

The Mission also called on the European Council to suspend the Association Agreement with Honduras due to its failure to fulfill human rights, and requested Spain and the EU to evaluate and suspend temporarily their funding to the EuroJustice program, until responsibilities for the assassination of Berta have been clarified. It requested the US government to clarify the relation between its aid programs, Agua Zarca and similar projects, and the harassment and assassination of people, like Berta, committed to the defense of their territories and rights. Similarly, that it clarify US participation in the investigation of the murder of Berta Cáceres, and suspend the Plan for the Prosperity of the Northern Triangle of Central America, and similar programs, while human rights are not guaranteed in Honduras.

In conclusion, the Mission requested the Office of the High Commissioner of the United Nations for Human Rights to activate the various Special Rapporteurs and relevant Working Groups, in order to realize a joint examination of the manner in which the situation of human rights in Honduras is affected by the numerous extractive projects underway or envisaged, so as to contribute by means of their recommendations toward fulfillment of the obligations of the Honduran state, as well as those of the business enterprises, funding entities and other States involved, in regard to human rights including especially the rights of indigenous peoples and the environment. Therefore, in addition to committing the continuity of the work initiated following on Berta´s assassination, the International Mission “Justice for Berta Cáceres Flores” calls on peoples, movements and popular organizations throughout the world, to strengthen their actions of solidarity with the members of COPINH, Berta’s family, Gustavo and all Honduran organizations and defenders of human and environmental rights in their struggle against the violence and dispossession to which they are being subjected. It deeply appreciates the inspiration, testimonies and support received from all of them while visiting the country, and endorses in particular the request of Berta´s family and comrades from COPINH, to receive greater direct accompaniment in the coming times, including through the broadest possible participation in the International Solidarity Gathering, to be held on 13, 14 and 15 April, in Tegucigalpa and La Esperanza / Gualcarque River.

As it was finalizing its Report, the International Mission “Justice for Berta Cáceres Flores” was advised of two significant responses with regard to the requests and recommendations formulated therein. First, the decision of the Public Ministry of Honduras, announced on March 31, to desist in its order of retention in the country of Gustavo Castro, effectively allowing Gustavo’s return to Mexico and reunion with his family and community. Second, the decision of the Central American Bank for Economic Integration, announced on April 1, to join its co-financing partners of Agua Zarca, FMO and Finnfund, in the provisory suspension of all disbursements for the same.

In view of the above, the Mission endorses the words of COPINH which, in a press release issued on April 1, expresses clearly and forcefully that “We must not doubt that any of these points have been through concessions by the groups whose power is at stake, but rather they are achievements of the popular mobilization triggered within and outside our country.” Indeed, as COPINH also noted, “there has not been any response to our demands before the government for justice and vindication..., the direct and indirect perpetrators of a range of crimes including the assassination of Berta remain free, building their dams and negotiating with their henchmen.”

Thus, the International Mission ratifies its commitment to continue its support to the struggle of COPINH and so many others in Honduras, “a struggle which continues to intensify in the face of the increasingly clear intention of impunity of the Honduran state and its allied multinational corporations, accompanied by increased hostility and persecution of our movement and everyone who dares to resist in this expropriated and bloody Honduran land, within a clear strategy of dismantling and destroying COPINH and the entire social movement.”

Members of the Mission