Smokable cocaines are commonly referred to as “the most harmful drug”, and considered not just a threat to public health, but also to public security in the urban centres of many large cities. As a result, its users are frequently subject to hostility and stigmatization. 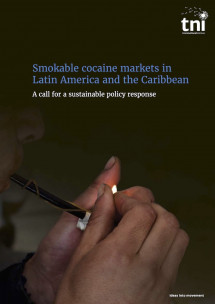 About smokable cocaine markets in latin america and the caribbean

The smokable cocaine market was established decades ago, and is definitely not a new phenomenon. Rather than disappear, it is undergoing a slow expansion: from constituting a rather localized and isolated habit in the Andean region in the 1970s, its reach has extended in all directions, throughout North and South-America, including the Caribbean and Central American regions. Societies in the Americas have coexisted with smokable cocaines for over four decades, but - surprisingly - there is a dearth of research on the development of the market, or much first-hand evidence of how this substance is actually commercialized and used by millions of people in the region.

This report reflects a study of the information collected by a network of researchers and street-corner workers assembled by TNI, and conducted from 2014 to 2018. Our objective was to understand how local markets for smokable cocaines in Latin America and the Caribbean are actually functioning. In the first phase, researchers in seven different urban locations from Mexico to Argentina were asked to collect data on the current volume and characteristics of the market, with the aim of creating an overall picture of the current situation. In a second phase, further information was solicited in order to define policy responses to stimulant use, focusing particularly on harm reduction measures.
smokable cocaine in latin america v3 297513831 720x720 f30.mp4 (Document, 25.94 MB)

The different forms of violence confronted by users of smokable cocaine need to be recognized and attended by public services. All policy interventions at the street level should aim to destigmatize and find concrete practical solutions to the immediate problems faced by users’ communities - initiatives inspired by the broad concept of “bed, bread and bath”.

In the design of a broader policy framework, users themselves need to be consulted and involved, enabling a form of implementation that can be checked and evaluated by its effects on the community itself. The experiences obtained in the past decade in a number of cities mentioned in this report make a strong case for developing public policy models that combine all the above features, and need to be given the appreciation and resources they deserve. A region-wide systematic evaluation of these experiences could contribute to more humane and effective polices regarding the different forms of smokable cocaine.

Latin America and the Caribbean