The far right is increasingly active globally—at the level of governments, through civil society, and in the digital sphere. Their political parties are cooperating across borders, their anti- democratic actions are undermining the rule of law, their attacks on “globalists” are eroding the efficacy of international institutions, and their racist memes are spreading throughout culture. According to the 80 academics, researchers, and activists interviewed in this report, this threat to democracy and internationalism is urgent. 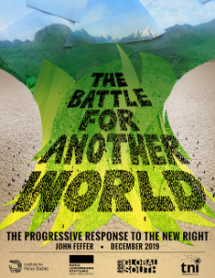 The Battle for a New World: The Progressive Response to the New Right (PDF, 2.52 MB)

About the battle for a new world

Yet, the global response to this organizing on the far right has been muted. Those who oppose the far right have been focusing their efforts largely at a local and national level. Meanwhile, global threats such as climate change, a widening gap between rich and poor, and entrenched militarism require more, not less, international cooperation. A refocus on local and national struggles at the expense of organizing at the global level provides the far right with an opportunity to rewrite the rules of the international order along illiberal lines.

The Battle for a New World: The Progressive Response to the New Right (PDF, 2.52 MB)