In July 2016, the Colombian government enacted Law 1787, which regulates the use of medicinal cannabis and its trade in the country. With this decision and a series of subsequent resolutions, Colombia joined the more than a dozen countries that have put into practice different types of regulation to explore the advantages of this plant as an alternative pharmaceutical. 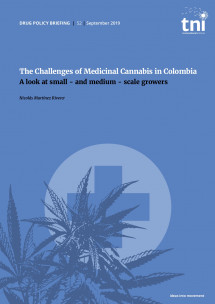 About the challenges of medicinal cannabis in colombia

Nicolás Martínez Rivera
Through the issuing of four types of licences (for the cultivation of psychoactive cannabis and non-psychoactive cannabis, for the use of seeds for planting and for the manufacture of by-products), the door was opened not just to scientific research but to a business that is going from strength to strength all over the world, and that some predict will be worth about $54 billion (US dollars) by 2025. More than 300 licences have been issued since the law entered into force and the country is experiencing a ‘green gold’ fever, which has attracted the attention of large investors who see cannabis as the business of the future. The country’s geography and climate, the cost of labour and inputs, and a robust long-term legal framework have made Colombia an ideal place for growing cannabis and an appealing location for transnational corporations to do business.
The entry into force of this law signified a change in the country’s drug policy. Colombia’s recent history has been marked by the presence of drug trafficking and violence associated with social conditions in the country. During the 1960s and 70s Colombia was one of the world’s main marijuana producers, and for the last 40 years it has been the leading producer of cocaine. This went hand in hand with a social and agrarian conflict that continued for more than half a century. The conflict lead to a war between guerrilla organisations, who saw drugs as a way to finance their political project, and other drug trafficking groups, whose leaders set up their own armies to defend themselves against extortion and threats from these insurgents. Compounded by a prohibitionist national drug policy, this situation led to new outbreaks of violence, the infiltration of drug traffickers into pre-existing social conflicts, and clashes with state security forces, ultimately resulting in about 6 million casualties. For decades, the Colombian government’s response to the problem of drug trafficking focused on prohibition and military attacks, causing even more negative effects rather than providing a real solution.
This is why this change in the law not only offers an alternative in terms of public health but also represents a key component in the rebuilding of a society that has suffered armed conflict for decades. In addition to this shift, in 2016 the Colombian government put an end to more than 50 years of armed conflict with the FARC guerrilla movement by signing a peace agreement. One section of this agreement focuses precisely on crop substitution and the need for a change in drug policy. Although the approach to cocaine is still punitive, Law 1787 was also designed to offer an alternative to families who were involved in drug trafficking, enabling them to move into a legal business by growing medicinal cannabis.
Although it is not clear how many people depend on this crop, the figures show that marijuana is the most commonly used drug in Colombia. The national market for medicinal cannabis is estimated to comprise some 5 million patients – a demand which small-scale growers can undoubtedly help to meet. However, this opportunity has been swiftly seized by large national investors, such as those formerly in the flower industry, and has attracted an influx of foreign capital. Due to the type of regulation introduced by the law, which aims to develop a pharmaceutical industry, small- and medium-scale growers have found it difficult to enter the market because they are unable to invest the millions that the business requires.
Even though the law stipulates that 10 per cent of production should come from small- and medium- scale growers, the reality is that most of the business has been dominated by large local and foreign investors. Although there are cases of associations of small-scale farmers who have come together to obtain a licence, the majority have only managed it by going into partnership with transnational corporations, most of them Canadian, which already have experience in the business. Because of this, since the law was enacted the government has passed resolutions that seek to incentivise and promote local production. However, the situation is far from ideal for local producers and discontent has already arisen. This article analyses Law 1787’s entry into force in 2016 and the challenges posed by implementing the arrangements for medicinal cannabis, especially with regard to the involvement of small- and medium-scale producers.
The first section of the paper briefly reviews the recent history of cannabis and its use in Colombia. It then focuses on the changes in the legislation that led to the approval of Law 1787 in 2016. The third section provides an in-depth analysis of the law’s implications, the types of licence and subsequent resolutions. It goes on to present an overview of the current situation in the cannabis business, the companies involved and the role of small- and medium-scale rural producers. The final section offers suggestions for how this legislation could provide more benefits to the first links in the supply chain – the people who have not only suffered the most from the negative impacts of drug trafficking but also from problems related to land distribution.