The EU trade and Investment Agenda: quashing the aspirations of the Arab Spring?

The EU's launch of negotiations for Deep and Comprehensive Free Trade Agreements (DCFTAs) with four Arab countries in transition – Egypt, Jordan, Morocco and Tunisia - looks set to entrench an economic model that was one of the root causes of the Arab Spring. 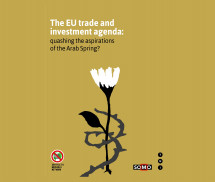 The EU trade and Investment Agenda: quashing the aspirations of the Arab Spring? (PDF, 180.7 KB)

About the eu trade and investment agenda: quashing the aspirations of the arab spring?

Through DCFTAs, the EU is now pushing to extend and consolidate its preferential trade relations with these countries. But many civil society organisations are concerned about the risks that the ‘investment protection chapters’ of these agreements pose for the Deauville countries – in terms of their freedom to set their own policy, and promote inclusive growth and sustainable development.

Since the Lisbon Treaty in 2009, the responsibility for negotiating investment issues has shifted from individual EU member states to the central European level. This means the EC can now negotiate ‘investment chapters’ with Free Trade Areas such as the Deauville Partnership countries. A key element of investment agreements are investment dispute settlement clauses. These grant transnational corporations the right to sue governments before international investment tribunals over policy measures that potentially damage their profitability.

Claims and awards over profits lost because of policy changes run into hundreds of millions of dollars, with severe impacts for public spending, particularly in developing and transitional economies. The Agadir countries already face several investment disputes and it is likely the number of arbitration cases will increase as these transitional countries set out new social, economic and political policies in response to the wave of popular discontent that swept the region in 2010-2011.

The neoliberal economic model which the Agadir countries have been pushed to adopt for more than 30 years helped fuel this discontent by failing to raise standards of living and provide employment and social justice for populations. Alarmingly, the DCFTA negotiations now carry the threat that this failed model will be strengthened and continue to dictate trade and investment relations between the EU and its Southern Mediterranean neighbours.

The EU, as their largest trading partner, should support the efforts of the Agadir countries (and the wider MENA region) towards more sustainable and equitable growth and development models, rather than facilitate closing down policy options by seeking to establish frameworks that allow transnational corporations and foreign investors to challenge political decisions in the public interest – essentially giving the 'market' will be as big a role in determining policy as the state.

While alarming, DCFTA negotiations potentially offer a window of opportunity to rebalance investment relations and to bring them in line with the aspirations of the recent social upheavals that forced regime change in Egypt, Tunisia and Libya and fostered a reform agenda in Jordan and Morocco.

The EU trade and Investment Agenda: quashing the aspirations of the Arab Spring? (PDF, 180.7 KB)

Profiting from injustice How law firms, arbitrators and financiers are fuelling an investment arbitration boom