The distribution of land and its unjust use are the major causes of violence in Colombia. For this reason land issues are the starting point of current peace talks between the Santos government and the FARC guerrillas. Remedying these structural problems at the heart of rural Colombia is the best guarantee of progress of the current peace negotiations that could bring an end to a half-century-old violent conflict. 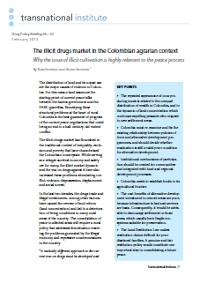 About the illicit drugs market in the colombian agrarian context

The illicit drugs market has flourished in the traditional context of inequality, exclusion and poverty that have characterised the Colombian countryside. While serving as a refugee survival economy and safety net for many, the illicit market dynamic and the war on drugs against it have also increased these problems, stimulating conflict, violence, dispossession, displacement and social unrest.

In the last two decades, the drugs trade and illegal investments, among other factors, have caused the reverse of land reform (land concentration) and led to a deterioration of living conditions in many rural areas of the country. The consolidation of peace in affected areas will require a rural policy that addresses this situation resolving the problems generated by the illegal economy and repressive countermeasures in the country.

The new peace talks4 offer, once more, a framework to develop alternative ways to address the supply of drugs. There is a growing consensus amongst widespread sectors of society that the drug prohibition model has failed to bring us any closer to the illusionary drug free world. Today, there is a new atmosphere of debate on drug strategies and potential alternatives that acknowledge the negative impacts and collateral damage that have resulted from drugs and drugs policies up to now.

The government of President Santos has been open to this discussion and invited other governments, mainly within the hemisphere, to do the same. The inclusion of drugs on the agenda of peace talks could be an opportunity to push the discussion forward and develop concrete actions, particularly on the issue of Alternative Development (AD) policies. Defined by the UN as a process to prevent, reduce and eliminate the illicit cultivation of plants containing narcotic drugs, AD should be part of a larger rural development strategy and sustainable development efforts.

This briefing will present some recommendations and policy proposals on Alternative Development that could be considered at the negotiation table in Havana.

• The repeated appearance of coca producing zones is related to the unequal distribution of wealth in Colombia, and to the dynamic of land concentration which continues expelling peasants who migrate to new settlement areas.

• Institutional mechanisms of participation should be created for communities and integrated with local and regional development processes.

• Colombia needs to establish limits to its agricultural frontier.

• The cost-benefits of alternative development investment in remote areas are poor, because infrastructure is bad and services are basic. Consequently, it would be advisable to discourage settlement in those areas, which usually have fragile ecosystems suitable for preservation.