The Politics of Flexing Soybeans in China and Brazil

The trajectories of soy developments in Brazil and China are related despite moving largely in opposite directions. 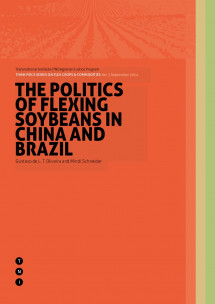 The Politics of Flexing Soybeans in China and Brazil (PDF, 1.08 MB)

About the politics of flexing soybeans in china and brazil

Soybeans as a multiple and flexible crop

In terms of production volume, land use, and international trade, soy is among the most important crops in the world today. State- and agribusiness-led processes of agro-industrialization have profoundly expanded soy’s frontier, such that over the past 60 years or so, global soybean production has increased by almost 1,000 percent, while the land area under soy cultivation has more than quadrupled (FAOSTAT n.d., USDA 2014).

The United States became the world’s leading producer, processor, and exporter of soybeans in the mid-20th century, and US-based companies still control most of its production technology and trade. Since the 1990s, however, there has been a dramatic shift in soy’s political geography.

South America’s Southern Cone, where soy is the “the monoculture ‘starlet’ of the agro-export model”, produces 57 percent of global soybean exports (Rulli 2007: 16, Oliveira and Hecht forthcoming). At the same time, East Asia is the leading consumer of soybeans from international markets, currently accounting for more than 65 percent of total imports, and surpassing European consumption since the year 2000.

This new agroindustrial geography reveals much about the multiple and flexible uses of soy, and analyzing the history and political economy of these uses within and between Brazil and China – both key components of the global soybean complex – enables a more nuanced understanding of the current politics of ‘flex crops’ and agroindustrialization. As a crop largely defined by the value and usefulness of its co-products – namely, soybean meal and soybean oil – soy might be regarded as a fundamentally flexible crop (see Borras et al. 2014).

Of the world’s total soy production, only 6 percent is consumed in the form of whole beans, tofu, or other whole-soy and fermented foods. The remaining 94 percent is crushed, either mechanically or chemically, to produce soybean meal and oil for further processing: a crushed bean produces about 79 percent meal, 18.5 percent oil, and 2.5 percent waste and hulls (HighQuest Partners and Soyatech 2011, WWF 2014).

Worldwide, the meal portion of the crush is predominantly used in livestock feed (98 percent), while the remainder becomes soy flour and soy protein for food processing industries. Soy oil is largely refined as edible oil (95 percent), while the rest is funneled into industrial products, including biodiesel (Soyatech 2014).

Technically, these multiple industrial uses are possible because soy protein and oils can serve as a petroleum-replacement, contributing several other functions in chemical derivatives for use in manufacturing. Livestock feed and vegetable oil producers might source raw material somewhat flexibly between soybeans and other grains or oilseeds according to market price and availability.

However, as soybeans become increasingly cheaper, better equipped for multiple uses, and more widely available than their alternatives, major soybean traders and crushers become strategically positioned to control downstream industries. Politically, soy’s multiple-ness and flexible-ness is a consequence of the structure and operation of the global soy complex, which is controlled by a few major agroindustrial processing and commodity trading companies, some of which hold their position as legacies of North Atlantic-based agribusiness governance, with others emerging from new geographies and power relations.

The Politics of Flexing Soybeans in China and Brazil (PDF, 1.08 MB)