The Politics of Sugarcane flexing in Brazil and beyond

Flex crops, spread over greater expanses of land, are increasingly interlinked through international exchange in food, feed and fuel. Brazilian exports of sugarcane ethanol to the US are in part influenced by the domestic US production of maize ethanol, which in turn is shaped by the price of feed and the soybean supply. 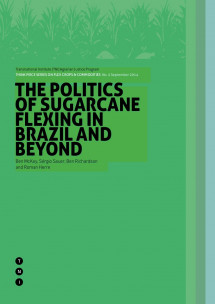 The Politics of Sugarcane flexing in Brazil and beyond (PDF, 1.35 MB)

About the politics of sugarcane flexing in brazil and beyond

Global sugarcane production literally outweighs that of any other crop. In 2013 it reached 2.16 billion tonnes – more than double that of maize, which was the crop with the second largest weight (FAO 2014). While not necessarily an indication of the crop’s market or ‘exchange value’, this measurement does reveal the sheer amount of biomass produced via sugarcane agriculture and hints at the potential gains that might develop from making and monetizing other ‘use values’ from the plant.

Of course, sugarcane’s multiple uses are not new, as its liquid sucrose has provided the basis for sugar, molasses and rum for years, while steam energy has been creating through a process of burning cane stalks (bagasse) leftover after crushing.

Recently however, attempts to realize this exchange value appear to have entered a new phase, as both the variety and volume of raw material produced by the sugarcane industry have increased markedly. These include more complex sucrose derivatives such as ethanol and other chemicals used for liquid fuel and plastics, more intensive use of bagasse as a solid fuel for electricity and gas generation, and the capture of ‘waste’ from the milling process that is then turned into fertilizer and animal feed.

Even the cane straw – the tops and leaves that were previously burned away from the cane stalk before harvesting – are being targeted for use with the bagasse in electricity production or for transformation into so-called ‘second generation’ cellulosic ethanol.

In short, and in the context of a rising demand for all forms of natural resources (food, fuel, feed, fertilizer, etc.), there has been a renewed effort to increasingly create and commercialize revenue streams, or as the milling group Illovo puts it, to “optimise the return on every stick of cane” (Illovo 2014b).

We are also witnessing a greater degree of flexibility over which of these revenue streams takes precedence in the production process. It is no longer the case that all other raw materials are mere by-products of sugar. Depending on anticipated returns, many sugarcane mills in Brazil engage in arbitrage and ‘flex’ from one harvest to another, moving between a product mix based on 60 per cent sugar and 40 per cent ethanol, to a 40-60 split.

Indeed, such are the opportunities for capital accumulation in non-food markets that the owners of the biggest milling groups now openly declare their intent to “generate value through the vertical integration of the sugar and ethanol business chain” and build whole companies “focused on the infrastructure and energy sectors” (Copersucar 2014a, Cosan 2012).

The Politics of Sugarcane flexing in Brazil and beyond (PDF, 1.35 MB)