The Sugarcane Industry and the global economic crisis

An examination of ethanol production in Brazil, highlighting the role of financial capital, the territorial expansion of agribusiness and the impacts on labour relations and indigenous peoples and peasant farmers. 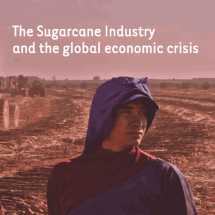 The Sugarcane Industry and the global economic crisis (PDF, 2.11 MB)

About the sugarcane industry and the global economic crisis

In rural Brazil, we have observed that the expansion of monocropping for the production of agrofuels, namely sugarcane ethanol, continues. Ethanol made from sugarcane is said to be Brazil's main source of agro-energy, considering the volume produced, the total area used for sugarcane production and the amount invested in the expansion of the sugar-energy industrial park.

Described as a process to open new frontiers, the expansion of sugarcane production has been concentrated, in terms of production volume, in the Centre-South region, principally in the States of Minas Gerais, Goias and Mato Grosso do Sul, Parana and Sao Paulo.

The Sugarcane Industry and the global economic crisis (PDF 2.11MB)We observed rapid growth in the sector's production levels, mainly between the 2004-05 and 2010-11 harvest years. During this period, there was a 50.08% increase in the amount of sugarcane processed. Also in this period, the production of sugar and ethanol increased 45.2% and 79.6% respectively. However, there was a change in this trend during the 2011-12 harvest: while the volume of production began to decline, the territorial expansion of sugarcane monocropping continued.

The global financial crisis brought significant changes to the sugarcane industry in terms of the patterns of expansion that had been traced over previous years. Taking advantage of the increase in the value of the Brazilian Real (R$), many sugarcane plants took out cheap loans in US dollars and used the funds to speculate in foreign exchange derivatives. When the dollar’s value rose again in relation to the Real, many factories went bankrupt and the sector accumulated more than R$4 billion in losses. Companies stopped investing in, for example, the renewal of sugarcane plantations, crop handling and fertilization, which are needed to maintain high production levels. This is why in January 2012, the Brazilian government released R$4 billion in funds to be used specifically for plantation renewal. In addition to the decline in productivity levels, we have observed the monopolistic internationalisation of the sector, an increase in the need for subsidized credit, the expropriation of small producers’ and indigenous peoples’ land and the substitution of food crops with sugarcane.

The Sugarcane Industry and the global economic crisis (PDF, 2.11 MB)