Rebranded as ICS, rights for corporations to sue states refuse to die 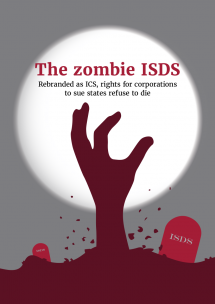 About the zombie isds

For the past two years, an unprecedented Europe-wide public controversy about a once-unknown element in international trade agreements has kept citizens, politicians and the media on their toes. It’s all been about the socalled investor-state dispute settlement system, in short, ISDS.

ISDS is included in thousands of international agreements. It allows companies to sue governments if policy changes – even ones to protect public health or the environment – are deemed to affect their profits. These lawsuits bypass domestic courts and take place before an international tribunal of arbitrators, three private lawyers who decide whether private profits or public interests are more important. Across the world, investorstate tribunals have granted big business billions of dollars from taxpayers’ pockets – often in compensation for public interest measures.

When the European Commission proposed to include this powerful legal regime for corporations in the trade deal under negotiation with the United States, the Transatlantic Trade and Investment Partnership TTIP, this triggered massive opposition: over 97% of a record 150,000 participants rejected such corporate privileges in a public consultation. Criticism also mounted in EU member states and the European Parliament. ‘ISDS’ has become “the most toxic acronym in Europe”, according to EU trade chief Cecilia Malmström.

In an attempt to get around the enormous opposition generated by ISDS, the European Commission chose a different label when, in autumn 2015, it released a revised proposal for all the EU’s ongoing and future investment negotiations, including TTIP. Instead of the ‘old’ ISDS system, the Commission promised a ‘new’ and allegedly independent system, supposed to protect governments’ right to regulate: the Investment Court System or ICS. The analysis in this report shows that the proposed ICS does not put an end to ISDS. Quite the opposite, it would empower thousands of companies to circumvent national legal systems and sue governments in parallel tribunals if laws and regulations undercut their ability to make money. It would pave the way for billions in taxpayer money being paid out to big business. It could curtail desirable policymaking to protect people and the planet. And it threatens to lock EU member states forever into the injustices of the ISDS regime.

In a nutshell, the proposed ‘new’ ICS is ISDS back from the dead. It’s the zombie ISDS.

1. The number of investor-state cases, as well as the sum of money involved, has skyrocketed over the last two decades from a total of three known treaty cases in 1995 to nearly 700 known investorstate claims by January 2016 and an absolute record high of 70 new investor lawsuits filed in 2015 alone. The amount of money has also expanded dramatically, with a compensation award against a country reaching the staggering sum of US$50 billion in one case. The main financial beneficiaries have been large corporations and rich individuals.

2. The last two decades have seen billion-dollar investor lawsuits against the alleged damage to corporate profit of legislation and government measures in the public interest. Countries on every continent have been challenged for anti-smoking legislation, bans on toxic chemicals, anti-discrimination policies, financial stability measures, restrictions on dirty mining projects, and more. For example, 60% of the claims against EU member states concerned the environment. A lawyer defending countries in these cases has called their legal base, international investment agreements, “weapons of legal destruction”.

3. The EU’s ‘new’ ISDS model (re-labelled ICS) is as dangerous for democracy, public interest law, and public money as the ‘old’ model enshrined in the EU-Canada trade agreement CETA. With the exception of some procedural improvements – an enhanced selection process for arbitrators, stronger ethics rules, and the establishment of an appellate body – the rebranded version essentially contains the same investor privileges, often in wording identical to the CETA text.

4. Investor claims against non-discriminatory and lawful measures to protect health, the environment, and other public interests would be possible under the new EU proposal as it includes the same far-reaching investor rights relied upon by companies like Philip Morris (suing Uruguay over tobacco control measures) and TransCanada (which has announced it will sue the US for US$15 billion over the rejection of the controversial Keystone XL oil pipeline).

5. Under the EU proposal, billions in taxpayers’ money could be paid to corporations, including for future lost profits that they hypothetically could have earned (like in one case against Libya which was ordered to pay US$905 million to a company which had only invested US$5 million). Countries could also be ordered to pay compensation for new laws and regulations in the public interest. The EU’s proposed formulations on the protection of the right to regulate would not shield governments from these potentially crippling costs.

6. The EU proposal increases the risk of costly lawsuits against public interest measures as it arguably grants investors even more rights than many existing investment treaties, which have already led to hundreds of investor-state lawsuits around the world:

a) By protecting investors’ “legitimate expectations” under the so-called “fair and equitable treatment” clause, the EU risks codifying a very expansive interpretation of the clause that would create the ‘right’ to a stable regulatory environment. This would give investors a powerful weapon to fight regulatory changes, even if implemented in light of new knowledge and democratic choice.

b) The type of dangerous umbrella clause proposed by the EU would lift all written contracts of a state with regards to an investment to the level of international law, multiplying the risk of costly lawsuits. The clause is not part of the CETA between the EU and Canada, presumably because Canada rejected it as too risky.

7. If the US-EU trade agreement TTIP included the proposed investor rights, liability and financial risks would multiply for EU member states and far exceed those posed by any existing treaty signed by them: under TTIP, 19 more EU countries could directly be sued by US investors (compared to only 9 with an investment treaty with the US today); TTIP would cover 99 per cent more US-based investment in the EU (up from only 1 per cent under existing treaties); and more than 47,000 companies would be newly empowered to sue (compared to around 4,500 today). TTIP could invite the launch of nearly 900 US investor lawsuits against EU member states (compared to 9 claims under existing treaties).

8. Under the EU proposal, transnational companies could even sue their own governments – by structuring their investment through a subsidiary abroad or asking an abroad shareholder to sue. In the context of TTIP, this danger is particularly real given the US$3.5 trillion worth of US-held securities in the EU. There is hardly a ‘European’ company that does not have a ‘US’ investor who would have standing to bring a TTIP claim against the EU or its member states.

9. The EU’s investor rights proposal is a sure-fire way to bully decision-makers, potentially curtailing desirable policymaking. There is already evidence that proposed environmental and health protections have been abandoned, delayed or otherwise adapted to corporate wishes because of expensive claims or the threat of litigation. Canada and New Zealand, for example, have delayed anti-smoking policies because of looming investor lawsuits from Big Tobacco.

10. The dispute settlement process proposed by the EU is not judicially independent, but has a builtin, pro-investor bias. Since only investors can sue, there is an incentive for the arbitrators (re-labelled ‘judges’ in the EU proposal) to side with them as this will bring more lawsuits, fees, and prestige in the future. Restrictive selection criteria, the lack of cooling off periods and loopholes in the proposed ethics code for the arbitrators also give rise to concerns that tribunals will be staffed with the same private lawyers who have until now driven the boom in investment arbitration and grown their own business – by encouraging investors to sue and by interpreting investment law expansively to encourage more claims.

11. There are serious doubts about whether the investor rights proposal is compatible with EU law, one reason for growing concerns amongst judges. The Commission’s proposal sidelines European courts and is fundamentally discriminatory, granting special rights to foreign investors only. They could challenge court rulings as well as actions by governments and laws passed by Parliament, from the local to the European level.

12. Rather than putting an end to ISDS, the EU’s investment protection agenda threatens to lock EU members into ISDS forever. It will be practically impossible for them to exit from the investor privileges once those are enshrined in larger trade deals such as TTIP or CETA (because they would effectively have to leave the EU). The Commission’s proposed multilateral investment court – essentially a world supreme court exclusively available to corporations – risks perpetuating an already gravely unjust system where one side, typically large companies or wealthy individuals, get exceptionally powerful and actionable rights while the other side, the people of a country, get only responsibilities.

The EU’s attempt to massively expand and lock in the investment arbitration system comes at a time when more and more people from across the political spectrum are speaking out against the corporate legal straightjacket – and a growing number of governments are trying to exit from it.

This report concludes with a call to action: to abolish all existing treaties that allow companies to sue governments in international tribunals if laws and regulations undercut their ability to make money; to prevent supplemental corporate bills of rights in proposed treaties such as TTIP and CETA; and to axe plans for a world supreme court exclusively for corporations and the rich.