This study on the state of the energy sector in Tunisia (including renewable energy) is based on the key premise that energy is not a profit-making commodity, but a right. The study argues that access to energy and its production are political questions in essence, rather than purely technical ones. Drawing on a redistributive justice viewpoint, it addresses the following questions: Who owns what? Who does what? Who gets what? Who wins and who loses? Who benefits from the collective public good? 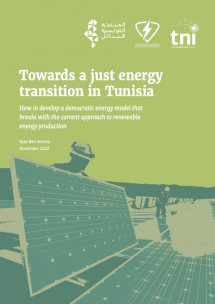 Towards a just energy transition in Tunisia: How to develop a democratic energy model that breaks with the current approach to renewable energy production (PDF, 6.2 MB)
Average time to read: 30 minutes

About towards a just energy transition in tunisia

What explains the need for this document today and in this very context? What do we expect it to add to our reality? Such were the questions the Energy Democracy Working Group had in mind when preparing this study. The urge to answer them has been the catalyst for moving forward, drafting it and accelerating its release to the public.

The predominance of a one-dimensional discourse within the energy system in Tunisia and the perception of this field as a closed circle exclusively restricted to the so-called "experts" lends this paper its timeliness as a vehicle for an alternative based on the core of social and trade union resistance to the dominant narrative. While most studies and research tackle the issue of renewable energy in Tunisia only from lucrative and technical perspectives with a view to support financial "feasibility”, ours is a study situated within a framework of energy democracy, resource sovereignty and the right to sustainable development.

In mainstream official discourse, pressing environmental issues of climate change have been used as a pretext to justify a process of removing the public sector from the energy field. Meanwhile, the main message the system conveys to public opinion focuses on the danger of an energy deficit and the need to overcome it by relying on exports and their foreign exchange revenues. In fact, it is on this flawed discourse that all speeches calling for the liberalization of energy, especially electrical energy, are based. After the outbreak of the war in Ukraine and under pressure from European and foreign donors, there has been a significant increase in energy sector diktats in Tunisia.

The energy crisis in Tunisia reflects the overall crisis of the economic system. Indeed, it is not so much the result of scarce resources or a weak public sector, but rather the consequence of a blind move towards free trade without any consideration of the social, environmental, and economic factors, and without the slightest concern for the priority to be given to local needs and energy sovereignty (due to the illusions of foreign investment and exports).

This study is intended primarily to serve as a starting point for reflection and a basis for struggle, in order to achieve a just energy transition in Tunisia and to design alternative energy policies based on the following imperatives:

A fundamental objective is to bring together as many skills and competencies as possible to achieve these aims and promote their implementation on the ground, to which we hope this paper will make a strong contribution as soon as it is published. We strive to convince and change public opinion towards a critical interaction on current questions such as those we are addressing here.

The report covers three main areas. The first is the global context of energy transition, which is essentially based on the shift from fossil fuels to renewable energies. To explain this shift, the report draws on objective data and figures that disrupt the dominant discourse. It also addresses the dynamics of investment in renewable energies particularly characterizing countries of the global North.

The second focus is on the Tunisian case, outlining the reality of electricity production and explaining the transition to renewable energies, whose usage is primarily based on the exclusion of the public sector and openness to the private sector. Further, this argument helps uncover the actors and mechanisms used to strengthen this regime of energy exploitation.

This is where the main controversy lies: government propaganda considers those who reject this mode of exploitation as opposed to inexpensive renewable energy. The truth, however, is that the government is trying to conceal the capitalist logic and inequality shaping privatized renewable energy projects in Tunisia: profit interests, benefits and other incentives for the private sector on the one hand, and a cumulation of negative effects on the national community as a whole on the other. These assertions are based on data and studies which the capitalist system it- self produces; they are therefore weapons with which to fight this system. They also can provide alternative narratives on renewable energies in Tunisia.

Towards a just energy transition in Tunisia: How to develop a democratic energy model that breaks with the current approach to renewable energy production (PDF, 6.2 MB)
Average time to read: 30 minutes