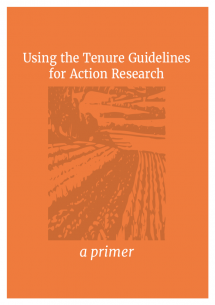 About using the tenure guidelines for action research

Accountability in general is about the challenge of holding those in power responsible for their decisions. Accountability politics is about exploring whether and how this can be done. This practical guide focuses on investigating accountability and accountability politics in the context of the current global rush for land and other natural resources. The purpose of the guide is to provide practical information to rural communities that they can use in framing and devising collective action and engagement strategies aimed at strengthening their tenure of land, fisheries and forest in order to bring about bottom-up accountability.

The guide highlights an especially interesting, relevant and practical tool – namely, the ‘Voluntary Guidelines on the Responsible Governance of Tenure of Land, Fisheries and Forests in the Context of National Food Security’ (here- after Tenure Guidelines or TGs for short). The Committee on World Food Security (CFS) of the United Nations adopted the Tenure Guidelines in 2012 with the overall goal of promoting national food security.

Developed from an unprecedented inclusive and participatory process that last- ed more than three years, they are the first international ‘soft law’ instrument that focuses on economic, social and cultural rights (ESCR) and how they can be applied to the governance of land, fisheries and forests. Soft law is a law that sets standards and gives guidance on a particular subject but is not mandatory. But, although it is not mandatory, soft law can be a precursor to the adoption of binding law at the national or international level. The Tenure Guidelines are firmly anchored in human rights and so their adoption by the CFS has opened up the possibility to interpret and use them as a springboard to support claims for the right to land. The legal principle of Pro hominem calls for applying the norm or standard most favourable for protecting vulnerable social groups, and thus allows us to interpret the TGs in line with the highest standards developed by the UN and regional human rights systems, as well as by case law. It allows us to interpret them in a way which contributes to establishing the human right to land in international customary law and in positive international human rights law.

Grassroots groups and social movements in which landless workers, fishers, peasants, herders, nomadic and indigenous peoples are organised have a natural ability to monitor the actual situation on the ground because they can give direct evidence of the shortcomings and problems that interfere with, or prevent the realisation of, their members’ right to land. Yet often these groups or movements do not have enough information about the reasons and persons responsible for these shortcomings and problems; they may lack methods and tools to collect, organise and analyse information in order to be able to use this knowledge to generate a change in public policy. Meanwhile, officials responsible for executing the administrative functions of the State are often unaware of the human rights criteria that enable them to determine whether they are fulfilling their duty in accordance with human rights obligations in regard to land, fisheries and forests.

Serving as a reference, the TGs can provide guidance toward improving governance of land, fisheries and forests so that it can contribute effectively to securing the right to adequate food. They are an especially important and politically legitimate reference due to the fact that they were internationally agreed upon as a normative standard to assesses the actions and omissions of states and UN agencies, as well as international organisations, with respect to the way they regulate land, fisheries and forests in specific situations.