The EU and Mexico launch negotiations for a ‘modernised’ Free Trade Agreement. A key feature is the investment protection chapter which grants major multinational companies in Mexico and the EU the exclusive right to challenge democratic decisions taken by States, even when they were taken in the public interest. The report outlines six reasons of major concern. 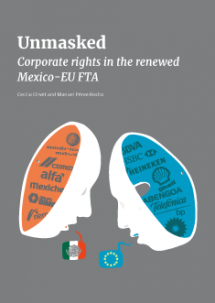 About unmasked: corporate rights in the renewed mexico-eu fta

Mexico and the European Union will soon begin the “modernisation” of their 15 year old Free Trade Agreement (MXEU FTA). Although MXEU FTA was the first comprehensive trade deal with a Latin American country, the level of trade liberalization and investment protection in subsequent EU deals has been far higher. The 'renewed' FTA with Mexico stands to go much further than its predecessor.

Independent reports have established that the current MXEU FTA has had negative consequences in terms of diversification of foreign trade, greater investments in development and job creation, and human rights protection. Far from addressing these failures, “modernising” this agreement is just a euphemism for the extension and deepening of investors’ protection rights. A key feature of the “modernisation” process is the inclusion of an investment protection chapter and a mechanism for settlement of investor-state disputes.

If pushed through, the “modern” FTA with a full-fledged investment protection chapter will:

1. Allow foreign investors to challenge public interest legislation in Mexico and in Europe

The current EU investment protection proposal -already included in the EU-Vietnam and the EU-Canada deals and being negotiated with the United States- will be rolled into all new EU trade agreements, including the one with Mexico.

Under this proposal companies will maintain the rights to launch multimillion-dollar arbitration lawsuits against the Mexican government over measures designed to protect the people and the environment. Contrary to what the EU claims, the Investment Court System proposed by the European Commission fails to protect the right to regulate. There is nothing in the text of the EU investment model that prevents companies from challenging public interest decisions and arbitrators from deciding in favour of investors, ordering states to pay billions in taxpayer compensation for legitimate public policy measures. The Commission has included ill-defined rights for investors, such as fair and equitable treatment and indirect expropriation. In fact, governments will have to defend public interest measures as “necessary” and in line with “legitimate” objectives in the face of investors’ attacks. The cases will be decided by highly paid lawyers –re-labelled as judges by the EC- who maintain a strong financial incentive to interpret the law in favour of the investor. The salaries are paid by the parties in the dispute at a rate of USD 3000 per day.

2. Locked in privatisation and pro-corporate reforms in the oil and gas sector in Mexico

In December 2013, the Mexican government opened up, after decades, the exploitation of the oil and gas industry to foreign companies. EU energy companies like Shell, BP and Total have a key interest in the Mexican oil market. The strengthening of investment protections under the new EU MX FTA will lock in these reforms. Future Mexican governments will find it hard to reverse these policies without the risk of being sued at international investment tribunals. The risk of lawsuits by oil companies is real since a significant proportion of the international investment arbitration cases stems from the energy sector, and many involve countries that have undergone energy reforms. Oil and gas companies have initiated 57 known investment disputes, 80% of which were launched in the last 10 years. Countries in the Latin America and Caribbean region are the biggest target.

3. Make it much harder for Mexico and individual European countries to pull out of this agreement

Mexico has bilateral investment treaties (BITs) with 16 out of 28 EU Member States. The majority of these can be terminated at any time or by 2019, giving the Mexican government great discretion to assess whether or not to maintain these agreements. However, if Mexico replaces the current BITs with an investment protection chapter in the EU FTA it would be virtually impossible to withdraw the new rights granted to foreign investors. The only way would be to put an end to the whole agreement. Furthermore, if an individual member State wanted to consider a revision of the rights granted to Mexican investors, it would have to leave the European Union to roll back commitments.

4. Put Mexico at risk of being the target of a new wave of investment lawsuits by European investors

Mexico, having already faced 23 investment treaty arbitration cases, is the seventh most sued country in the world. As a result of these lawsuits, it has already paid $246 million USD plus interest in “damages” to nine different companies. US investors have initiated most investment arbitration claims so far, but in recent years, several Spanish companies have also led claims against the Mexican government. Telefónica for example is demanding the staggering amount of over USD 1 billion in compensation for Mexico’s regulation of the telecommunications sector, a measure that was recommended by the Organisation for Economic Co-operation and Development (OECD) itself.

By signing an investment protection agreement with the European Union, the Mexican government will expose itself to new investment lawsuits by European investors, potentially costing millions from the public budget. Investors from EU member states are the most avid users of the Investment State Dispute Settlement (ISDS) system, having initiated 53% of all known ISDS disputes worldwide. Investors from the Netherlands, the UK and Germany are the most active. Coincidentally, investors from these countries are also the ones that currently invest the most in Mexico. The higher risk of further lawsuits is also enhanced by the fact that, since 2000, flows of EU Foreign direct investment to Mexico have tripled. European investments have been mainly channeled to financial services, tourism and telecommunications. Investments in these sectors are particularly at risk of leading to investment disputes. More than half of lawsuits brought by European companies worldwide have related to services industries, including financial services and telecommunications.

5. Increase the chances that EU governments become the target of lawsuits by Mexican multinationals

Mexican transnational companies are increasingly investing in Europe and in Spain in particular. 2014 marked a record high of Mexican investment in Spain. All of these investments and takeovers would make European countries susceptible to investment arbitration lawsuits by Mexican companies under a new investment protection chapter. While for a long time, Western EU member states had been immune to arbitration lawsuits, in recent years the wealthier EU member states have faced 43 investment treaty cases, 29 of which were against Spain.

European companies have a track record of human rights and environmental violations in Mexico with virtually total impunity. The proposed investment chapter developed by the European Union does nothing to address this situation. On the contrary, it will deepen the imbalance between binding rights for corporations and voluntary guidelines when it comes to respect of human right. The EU proposal does not include any obligations for investors, only rights. This is no surprise. The current Mexico EU FTA includes a Human Rights and Democratic Clause which could have triggered suspensions of the agreement in light of human rights violations. Yet, in the 15 years since this treaty entered into force, the European Union has ignored those violations rendering the clause a merely decorative element.

If Mexico and the EU move to modernise their relationship, it should be with the aim to redress the imbalance in favour of transnational corporations observed during 15 years of this free trade agreement instead of expanding investment protection by granting sweeping corporate rights to foreign investors.