A Walled World Towards a global apartheid

Over the last 50 years, 63 border walls have been built worldwide. This report maps the walls that have led 6 out of 10 people in the world to live in a nation with one of these border walls, analysing the justifications for the walls, the growing militarisation of borders everywhere and the businesses that have profited. 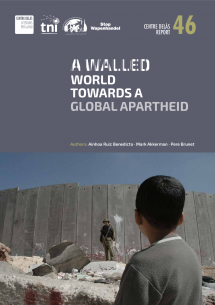 About a walled world

Towards the end of 1989, two historic walls tumbled, astonishing and inspiring people worldwide. The first, on 9 November 1989, was the fall of the Berlin Wall after 28 years. The second wall was more symbolic, but equally important in the way it divided people and segregated lives – the system of apartheid in South Africa. Even while Berliners started to dismantle the wall that separated them piece by piece, the newly appointed president of South Africa, F.W. de Klerk, had begun negotiating with the African National Congress (ANC), starting a process of ending apartheid. In February 1990, de Klerk unbanned the African National Congress, released Nelson Mandela and other political prisoners, and ended the state of emergency.

It is sobering, therefore, that 30 years later, the world has more walls than ever. From six in 1989, there are now at least 63 physical walls along borders or on occupied territory across the world, and in many countries, political leaders are arguing for more of them. Many more countries have militarised their frontiers through the deployment of troops, ships, aircraft, drones, and digital surveillance, patrolling land, sea and air. If we counted these ‘walls’, they would number in their hundreds. As a result, it is now more dangerous than ever before for people fleeing poverty and violence to cross borders, after which the border apparatus is still an active threat.

We are truly living in a walled world. These fortresses segregate people, protecting privilege and power and denying others human rights and dignity. This report argues that 30 years after its dismantling in South Africa, our walled world is creating a new kind of global apartheid. Such borders are constructed on racist ideologies, deny groups of people basic rights and perpetuate violence. As this report argues, the concept of global apartheid ‘helps explain tendencies and structures of power and global segregation’ in which ‘walls are just one of the physical and visible dimensions of the growing cultural, structural and physical violence that this system creates in the world’.

The report examines the expansion of walls built by a growing number of states, the underlying causes of the emergence of a global apartheid, and the corporations that are seeking to profit. As well as providing a global overview of border walls, the report looks at seven case studies: Australia, India, Israel, Mexico–Guatemala, Spain, Syria and Western Sahara. It shows that:

Driving and profiting from this surge in wall-building is an entire Border Industrial Complex. This industry has reinforced a narrative in which migration and other political and/or humanitarian challenges at the border are primarily framed as a security problem, where the frontier can never be secure enough, and for which its latest military and security technologies are always the solution.

Many walls and fences are built by local construction companies or by state entities, such as the military. However, the walls are invariably accompanied by a range of technological systems – such as monitoring, detection and identification equipment, vehicles, aircraft and arms – which military and security firms provide. Autonomous and robotic systems, such as drones and smart towers, are also increasingly used (or tested) for border security, including as part of, or connected to, walls and fences.

Behind the rise in walls and the border industry lies a powerful and manipulative narrative that has become hegemonic. It argues that migrants, in particular, are a threat to a way of life in particular countries, rather than victims of economic and political policies perpetuated and promoted by some of the world’s richest countries that force people to leave their homes. This narrative uses a language of fear to persuade citizens to support security-based solutions, in particular the militarisation of borders, and to turn a blind eye to its deadly consequences. It is manipulative, because it distracts people from the real causes of insecurity – the concentration of power and wealth in the hands of a small elite, a system that exists only because of the exploitation of the world’s poorest populations – that prevents the provision of housing, health care, education, and livelihoods to all that would ensure lasting security and peace.

The narrative of fear and security is clearly beguiling, as shown by the increase in walls worldwide, but the historical experiences of the fall of the Berlin Wall and apartheid 30 years ago show that it is not immutable. Changes in public opinion, particularly as a result of successful mobilisation of popular movements, can undermine even the strongest systems of oppression. Walls that divide us may seem permanent but education and political action can bring them down. It is time for a new wave of mobilisation – against the walled world that merely serves a small elite and betrays the hopes of the vast majority of humanity who want to live in dignity and with justice.