The economic, social and environmental crises have exposed the current dominant economic model as unsustainable. Now is the time to be proposing alternatives and demonstrating in practice how they could work. 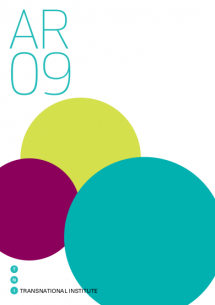 This 2009 Annual Report presents TNI’s efforts in the past year to continue to expose where the problems lie, and to shift policy in a more socially just and sustainable direction.

We are particularly proud of the achievements of our water work (see p 16-19). In the course of just six years, we can confidently claim a significant contribution to the changes we are now seeing at UN level, and albeit a little more modestly,at EU level.

The urban poor of the developing world are facing an acute shortage of access to drinking water – a fundamental right for human beings. This is caused by ailing public utilities and rapacious attempts by big – usually European – corporations to buy them up in the hope of turning a quick profit. TNI has argued strongly, and demonstrated in practice, that the solution does not lie with privatisation but rather in reforming public utilities.

This has worked very well where public utility managers, engineers and unionised workers work closely with users and community organisations. What has also helped enormously are ‘public public partnerships’ (PuPs) or non-profit twinning programmes between successful and underperforming utilities.

In what we see as a major victory, both the UN and EU are now offering funding for PuPs. Furthermore, the network that TNI has helped build around this issue in over 60 countries was invited to advise both bodies in 2009.

We are also seeing some results for our Alternative Regionalisms programme, which advocates a sustainable and people-centred regional integration as the best defence against globalisation in Southern regions. Latin America offers the most opportunity to experiment with an alternative regionalism. A first joint meeting between governments and social movements was held in Paraguay during the Mercosur Summit in 2009 to discuss just this (see p23). TNI facilitated the attendance of both parliamentary and civil society observers from Southern Africa and South East Asia who are interested to stimulate a similar dynamic in their own regions.

Our long-standing efforts to shift drug policy are making very good progress indeed. We now have more than 40 governments engaged in our informal drug policy forums. During the 10 year review of UN drug policy in 2009, it was clear that there is now a majority in favour of a harm reduction policy. This is directly attributable to TNI’s efforts. Decision-making at this level is based on consensus, however, and a few spoiler countries could therefore block official adoption of the principle.

Nevertheless, we are now seeing a wave of reforms being implemented across Latin America, which are also inspiring countries in South East Asia. TNI is being called upon to advise governments wanting to introduce drug law reform. We anticipate that it is only a matter of time before the contradictions force international treaty reform.

At a more general level, TNI is being taken ever more seriously by the mainstream media. Alongside visible and articulate social movements, we see the media as the other crucial means for shaping public opinion. In 2009, we put particular emphasis on media outreach -- with gratifying results. We employed two professionals – one in Amsterdam and one in Mexico – who successfully generated 250 articles citing TNI. This included reaching some of the most influential wire services and newspapers globally.

I would like to thank our dedicated interns, staff and fellows, our diligent researchers, editors and translators for their very hard work this year – typically way beyond the call of duty. I would also like to thank the vast network of organisations and individuals who collaborated with us this year in moving a few steps closer to a better world. The trust and confidence they have in TNI, and the appreciation they always show for our efforts make the long hours we put in worth every minute.

And finally, I would like to thank our donors without whom we could not exist. A few, in particular, deserve special mention. Firstly, the Samuel Rubin Foundation which has unfailing supported us for 35 years. Secondly, the Dutch Ministry of Development Cooperation and the Open Society Institute which have supported our programme continuously over the past five years. And finally, special thanks are due to Oxfam-Novib for stepping up to support us when our contract with the Ministry ended and we feared a funding gap.

TNI is now actively seeking new donors for the coming years. We are also encouraging appreciative individuals to donate through a shiny new button on our website!

TNI is one of the oldest institutes of its type still existing in the world. We have proved our worth in the 35 years of our existence, and hope to continue to serve in the global public interest for at least another thirty five. With your help, we can.