TNI has continued to work with social movements, policy makers and practioners, advocating a response to the growing combined economic, environmental and social crises by focusing on exploring and practicing alternatives. 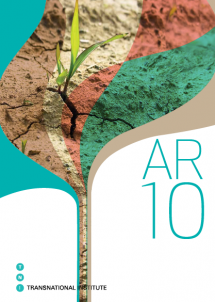 In 2010, the financial crisis continued to unfold, with Portugal, Ireland, Greece and Spain going into free fall. Governments in Europe – either bent on seeing the neo-liberal project to its bitter end or in thrall to the power of financial capital – slashed public budgets, fomenting a new wave of public outrage at having to bear the costs of the financial sector’s footloose irresponsibility. Potentially landmark cases in the US against Goldman Sachs and Merill Lynch for their roles in the crisis came to naught. In response, TNI’s Susan George published Whose Crisis, Whose Future? which urges people to assert democratic control over the economy and push it in a fairer, greener direction.

Through its programmes, TNI continued to expose how the mechanisms of neo-liberal globalisation work in favour of the richer nations at the expense of the poor. This included a focus on the European Union’s trade and investment negotiating stances vis-á-vis Southern countries and regions, and the extent to which national constitutional and legal systems have been compromised to enshrine primary rights for transnational corporations to extract profit regardless of the public interest. We also focused on agrofuels and the wider phenomenon of ‘land grabbing’, publishing the English translation of a critical book on agrofuels, completing a study on the subject for the CREPE project co-ordinated by Open University in the UK, and producing influential papers on land grabbing. New engagement of civil society organisations with FAO’s Committee on Food Security provided a useful platform to successfully challenge World Bank attempts to neutralise controversy through its Responsible Investment in Agriculture Principles.

At the same time, TNI has been central to transnational social movement efforts to develop viable alternative proposals. In 2010, we co-hosted two important bi-regional conferences, in which an impressive 3,508 delegates, representing 570 organisations from across Europe, Asia and Latin America, participated. One outcome was an effort to develop an alternative trade and investment mandate for Europe. A draft is now being discussed and refined through the networks. Some of the initial ideas were also tested in policy dialogues organised with the European Commission.

Meanwhile, TNI documents the plethora of progressive experimentation that provides evidence that another way is possible. In 2010, we continued as the coordinating hub for the Reclaim Public Water network. It seeks to empower public water utilities to ensure universal access to safe, clean and affordable drinking water. The Indian affiliates have made great strides in persuading state and national government officials of the merits of the model the network advocates. Prospects for up-scaling local efforts and having principles included in policy frameworks are looking very positive. We also proudly published the 14th edition of the Reclaiming Public Water book, an evolving collection of inspiring case studies from around the world. TNI undertook research on the role of workers and trade unions in the water sector. Meanwhile new work on the electricity sector is to be published as part of a bigger Municipal Services Project anchored by universities in South Africa and Canada. A complementary study of participatory democracy in Latin America and Europe was also completed this year, under the auspices of PARLOCAL, a collaborative project in which TNI was a partner.

At national level, we focused on over-populated prisons and disproportional sentencing. In Latin America, TNI undertook research on incarceration for petty drugs offences, complemented by powerful on-line video interviews with prisoners. Global concern about the gruesome situation in Mexico, and the campaign for a better approach to the drugs issue spearheaded by three former Latin American Presidents, attracted huge media attention in the Americas for our work. TNI is engaged with a number of Latin American governments on legal reforms. A block concerned to win a new consensus at the UN to give national governments the policy space they require. We have been actively supporting the Bolivian government’s effort to have the coca leaf removed from the UN’s list of scheduled substances. A number of governments have been persuaded not to object to Bolivia’s proposal.

Meanwhile, in Asia the second informal regional drugs policy dialogue was co-hosted by the Thai government and attended by stakeholders from Burma and China. One key outcome was an invitation from the Thai government to assist with its penal reform efforts. Meanwhile, TNI organised two meetings in China on drugs policy in the region, including investment in mono-cultural rubber plantations in Burma,. This is ostensibly to replace opium poppy production but effectively creating new problems.

Burma has been a long-standing focus of TNI work. In 2010, Aung San Suu Kyi’s house arrest was finally lifted and elections were held. TNI played a significant role in ensuring that ethnic minority voices were heard in the political debate both internally and internationally, and in challenging the wisdom of sanctions at this moment.

Financially, TNI had a difficult year without the institutional grant we had been receiving from the Ministry of Development Cooperation since 2003. We also experienced difficulty in raising funds for two of our programmes. Despite our best efforts, we closed the year’s books logging a deficit. Reluctantly, we had to end the employment contracts of four colleagues, while another two resigned in the course of the year, with only one being replaced.

In a bid to secure a new five-year grant from the Ministry from 2011, TNI initiated an alliance with five Netherlands-based organisations. The Fair, Green & Global Alliance is led by Both Ends and also includes the Dutch chapter of Friends of the Earth International (Milieudefensie), the Netherlands Institute for Southern Africa (NIZA), the Foundation for Research on Multinationals (SOMO) and the Clean Clothes Campaign. We secured a grant for a joint global programme starting in 2011, which will cover work on trade and investment, the international financial sector, corporate accountability and alternatives in practice. We also secured most of the co-funding required for this work in 2011, as well as the budget necessary for our Drugs and Burma programmes.

Our priority now is to secure the additional co-funding required up to the end of 2015. The NGO funding environment is changing rapidly as European governments cut back on grants, while the limited individual philanthropy available in TNI’s kind of public policy work has been hard hit by the financial crisis. New strategies will be required in the coming years to attract funding without compromising the autonomy or integrity of the Institute.

We sincerely thank all our current donors. Many of you have valued our work for many years and we trust will continue to do so for many more. You recognise that TNI is a rarity in successfully combining critique and proposition, bridging academia, activism and policy dialogue, and working from grassroots to UN levels in finding feasible solutions to pressing issues of global public concern. Please encourage others in your network to support us too.