2011 was marked by a sense of crisis, but also resistance to the measures being taken. Popular movements surged to the forefront worldwide, protesting the hollowing out of democracy that is a legacy of decades of neoliberal economic policy. TNI drew on its strong relationships within transnational networks to help push a countervailing power from below that might help shape a better world for us all. 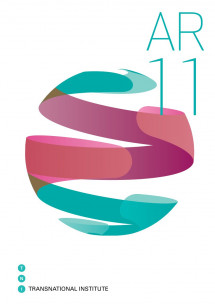 Message from the Director

As always when evaluating the year, I am at first astonished and then feel very proud at how much our small dedicated team is able to achieve in a year. The secret lies in the huge network of independent researchers, partners and allies around the world we can draw on and cooperate with to this end. Our thanks page at the end of the report gives a good sense of who and where they are. We acknowledge each and every one for their direct contribution to TNI's results in 2011.

The year was marked by a sense of crisis globally, felt perhaps most particularly in Europe and North America. The financial markets have been proving impossible to regulate, the all-powerful financial sector too big to control. Popular outrage burst out spontaneously and infectiously with the Indignados in Spain, the Occupy Wall Street movement in the US. Soon spreading across the world. At the same time, of course, there was the Arab spring, which shook dubious regimes everywhere. All were rebelling against the sense of powerlessness ordinary people feel with the hollowing out of democratic processes. This is one legacy of the neo- liberal ideology that we have had to endure for so long.

As the crisis bit deeper in the US and Europe went into terminal decline economically, there was much hype about the BRICS and other middle income countries as emerging powers – tipping the world upside down. TNI initiated a 'think spring' to examine what was going on more closely, and the implications for the Global South (in the proper sense of the concept i.e. the poor of the world).

What we discerned was a few extremely rich companies (mainly mining and financial) engaged in an accelerated scramble for resources – grabbing land, water, energy, mineral resources across the South. They are able to do this safe in the knowledge that their investments are protected by the myriad of international treaties their governments have negotiated for them without regard for the greater public interest. By year end – in the run-up to the Durban UN climate summit -- proposals emanating largely from the financial sector were advocating for the wholesale commodification of not just nature but her services. There is a new speculative market in the making. This will add to the noxious brew of already existing market-based instruments for making money out of the climate crisis, while doing very little to actually address the crisis.

TNI also took a peek at the opportunities that military and security industries are identifying for themselves in this brave new world. We have another 'think spring' looking into this.

Meanwhile, we drew some inspiration from the innovations in regional governance developed by Latin America countries. UNASUR was formally constituted and the Banco del Sur formally inaugurated in 2011. We also drew inspiration from the new movements, and from the countless communities organising and struggling to shape a better world for themselves.

Our fellowship and associated network is an invaluable resource for helping TNI frame the bigger context for our work. They help us make the connections, interrogate our assumptions and think ahead. We took up all of the above issues, and some more, in our programme in 2011.

The three inter-connected focuses of our current Economic Justice programme are corporate accountability, European trade and investment with the South, and alternatives in practice. These include questions of democratic governance, equitable provision of public goods and services, and social economies. The aim of the programme is to help build a countervailing power from below which can roll back the power of big business, re-orient trade and investment policy such that it serves the betterment of people and the environment, and thereby start to prise open the space so necessary if the public interest is to prevail.

In addition, we continue our long standing work on illicit drugs, and started renewed work on Burma. We constantly seek synergies across our projects – a common concern with land grabbing is proving an excellent bridge, for example.

TNI's modus operandus involves providing well researched information and analysis, facilitating spaces for exchange and coordination among movements transnationally and cross-sectorally, and advocating for alternatives. All the work is embedded in rich transnational networks of horizontal relationships. We operate in the nexus between activists, scholars and policy makers. This makes us a very special kind of activist research network, and one many scholar-activists would give their eye-teeth to work with, knowing that what they do is both relevant and will hopefully make a difference in a way that is neither elitist nor assumes a superior knowledge.

While our focus is transnational public policy, TNI works at many linked levels. Our work on land, water and drugs policy, for example, involves engagement from grassroots to UN level and back again. We are starting to see measurable progress at the level of global policy and practice in each of these areas. Our work on trade, investment and alternative regionalism links activists from local to regional level. Again, we are starting to see some real breakthroughs at the regional policy level.

TNI underwent considerable organisational change in 2011. It was the first year of implementation of a common economic justice programme implemented under the umbrella of the 'Fair, Green and Global' (FGG) Alliance. The Alliance was forged at the initiative of TNI in a bid to (successfully) secure funding from the Dutch Ministry of Development Cooperation. It involves five complementary organisations also based in The Netherlands, with whom we harmonise much of our Economic Justice programme. The complex new arrangement required us to further professionalise our operations.

We worked with a number of organisational development consultants to help us get on a sustainable financial footing, and to put in place the support systems we need to do our work better. We also overhauled our website, explored the potential of social media and began to experiment (surprisingly successfully) with e-books. We also renewed our fellowship and brought new blood into our extended Board. We said a sad farewell to six staff members, and welcomed four new colleagues. Others had their hours extended, leaving us with the equivalent of one less full time person than in 2010.

At the same time, our annual budget – and with it, our ambition – increased by 44% on 2010. The most significant grants in 2011 being public money from the Dutch Ministry for Development Cooperation and the European Commission, followed by the Open Society Institute. We ended the year with a 2% deficit, largely incurred by bad debts from previous years that we were forced to write off.

The funding future is not secured, however, for an institute like TNI in the current political climate. And we are alert to the need to broaden our funding base and defend our integrity as an independent organisation. We hope the results we report here will inspire you to help us with this.