After decades of tolerance, cannabis policy in Denmark has seen increasing crackdowns, driven by fears about violence and illegal drug markets. However, some activists and politicians argue that another way is possible. Produced as part of a the "New Approaches in Harm Reduction Policies and Practices" project, this Country Report seeks to understand the drivers of Danish cannabis policy today, and the possibilities for its future. 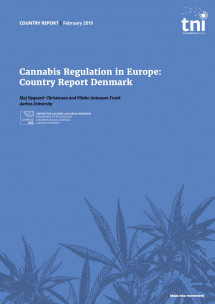 The context of cannabis policy and enforcement practice in Denmark has been increasingly repressive, shifting from an environment of tolerance towards a ‘zero-tolerance’ approach to the sale, use, and possession of cannabis. Political opposition to legalisation (and likewise, decriminalisation) so far outweighs support, and widespread media attention on the issue of medicinal cannabis since 2016 has not altered political positions on cannabis for recreational use.

The issue of gang conflicts and organised crime, particularly in 2017, contributed to renewed public and political attention to cannabis dealers and users, but with the exception of one political party, Radikale Venstre, this has not led to increased political support for legislative proposals. That said, the issue of legalisation is kept alive through regular hearings and conferences held at the Danish parliament and media debates.

Most recently, the former chair of the Social Democratic Party’s Parliamentary Group spoke out in favour of legalised cannabis in opposition to the official party line (DR 2018c). It remains to be seen whether other cities such as Aarhus will continue to submit similar proposals, and whether this might strengthen calls for legalisation.