The Canada-EU Comprehensive Economic and Trade Agreement (CETA) is much less known than its US-EU counterpart, TTIP,  but this report exposes how it still poses a serious threat to governments efforts to protect citizens and the environment. 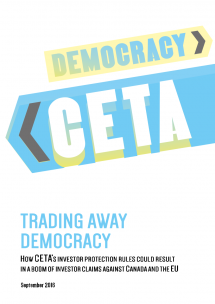 About ceta - trading away democracy (2016 version)

Please note: This is an updated and newly released version of a report, Trading Away Democracy, published in November 2014.

On September 26, 2014, Canada and the European Union (EU) announced the conclusion of a far-reaching economic integration agreement, the Comprehensive Economic and Trade Agreement (CETA). The agreement included an investor-state dispute settlement (ISDS) mechanism, later tweaked and re-branded as ICS (Investment Court System) in February 2016, which could unleash a corporate litigation boom against Canada, the EU and individual EU member states, and could dangerously thwart government efforts to protect citizens and the environment.

ICS, an ISDS mechanism, gives foreign corporations the ability to directly sue countries at international tribunals for compensation over health, environmental, financial and other domestic safeguards that they believe undermine their rights. These investor-state lawsuits are decided by private commercial arbitrators who are paid for each case they hear, with a clear tendency to interpret the law in favour of investors. While the Commission has described the tribunals as ‘public’, Germany’s largest association of judges and public prosecutors says neither the proposed procedure for the appointment of members of the ICS nor their position meet the international requirements for the independence of courts and that the ICS emerges not as an international court, but rather as a permanent court of arbitration.

ICS can prevent governments from acting in the public interest both directly when a corporation sues a state, and indirectly by discouraging legislation for fear of triggering a suit. Globally, investors have challenged laws that protect public health such as anti-smoking laws, bans on toxics and mining, requirements for environmental impact assessments, and regulations relating to hazardous waste, tax measures and fiscal policies.