Climate change action demands moving to an energy system based on renewables and leaving fossil fuels in the ground. International investment agreements, and particularly ISDS, stand in the way of energy transition. They limit the ability of governments to set the terms of their energy policy, including the support of renewable energy. Investment agreements such as the Transatlantic Trade and Investment Partnership (TTIP) and the Comprehensive Economic and Trade Agreement (CETA) will further empower corporations to challenge strong government action on climate change 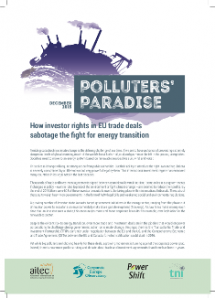 Avoiding catastrophic climate change is the defining challenge of our time. If we are to have a chance of preventing extremely dangerous levels of global warming, much of the world’s fossil fuels – oil, coal and gas – must be left in the ground, unexploited. Societies need to move to an energy system based on renewable sources like sun, wind and water.

This colossal change will require strong action from public authorities. But their ability to introduce the right laws and regulations is severely constrained by a little-known but very powerful legal system. This international investment regime has ensnared many countries in its legal nets in the last decades.

Thousands of trade and investment agreements signed between countries allow multinational companies to sue governments if changes in policy – even in rules to protect the environment or fight climate change – are deemed to reduce their profits. By the end of 2014, there were 608 of these investor lawsuits known to be taking place within international tribunals. The costs of these suits weigh heavily on governments, in the form of hefty legal bills and weakened social and environmental regulations.

A growing number of investor-state lawsuits target government initiatives in the energy sector, ranging from the phase out of nuclear power to moratoria on environmentally-risky shale gas development (‘fracking’). As law firms make money each time that an investor sues a state, this encourages more and more corporate lawsuits: for example, over legislation in the renewables sector.

Despite the evident risk to energy transition, even more trade and investment deals are in the pipeline that would empower corporations to challenge strong government action on climate change. Amongst them is the Transatlantic Trade and Investment Partnership (TTIP), currently under negotiation between the EU and the US, and the Comprehensive Economic and Trade Agreement (CETA) between the EU and Canada, for which ratification could start in 2016.

Yet while big polluters are lobbying heavily for these deals, a growing movement is turning against the corporate power grab. Indeed, there is now more public scrutiny and debate about trade and investment agreements than there has been in years.