China’s Engagement in Myanmar: From Malacca Dilemma to Transition Dilemma

Myanmar’s political transition, which began in 2011, has brought China’s relationship with the country into question. China has made important steps to recognise this, but fundamental difficulties remain, including ongoing ethnic conflict and conflicting visions of development. Given their proximity and troubled histories, it is essential that good relations are developed between the two countries on the basis of equality and mutual respect. This briefing outlines the key histories, developments and strategies in recent Myanmar-China relations. 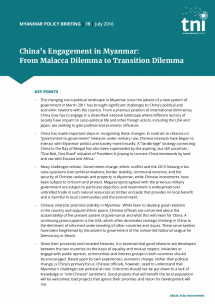 About china’s engagement in myanmar: from malacca dilemma to transition dilemma

As neighbours on a strategic crossroads in Asia, the relationship between China and Myanmar is today one of the most important in international geo-politics and regional development. After Myanmar’s independence, tensions with China were often deep as conflict and political turmoil swept both countries. In recent decades, ties have become closer due to social and political changes on both sides of the Yunnan frontier. Under previous military governments in Myanmar, this witnessed China becoming the largest foreign investor and dominant international influence in the country.

Since political transition began in 2011, many aspects of China’s engagement in Myanmar have come under challenge. Fundamental difficulties remain that can destabilise Myanmar-China relations at any time. These include ethnic conflict, Chinese investments, communal tensions, political reform and international power struggles. With the advent of a National League for Democracy (NLD) government this year, a new “Great Game” is underway that could have consequences for both the country and region for many decades to come.

This briefing examines the changing political and economic landscape, outlining the key histories, developments and strategies in recent Myanmar-China relations. A particular concern is the continuing conflict in the ethnic borderlands in Myanmar, which are in the front-line of contention and where many of the country’s most valuable natural resources are located. History has long warned that instability and political failure will continue until there is inclusive peace and reform in these territories.

In its race for economic growth and international influence, the Beijing government has major ambitions for Myanmar and the trans-Asian region in the 21 st century. In the South China Sea, this has become a source of tension. On the Yunnan border, in contrast, Chinese interests have made some important policy adjustments to socio-political change in Myanmar during the past five years. The Beijing government has also unveiled an ambitious “One Belt, One Road” vision linking China to Eurasia and beyond. But there is still a long way to go before equitable and stable relations are established to the benefit of the peoples of both Myanmar and China. Progress will depend on political solutions and economic relations that are in the interest of the peoples of Myanmar, developed by proper consultation and democratic acceptance, and not by initiatives or interventions that reflect economic self-advantage and superpower dominance.