If I Only had a Heart A DisCO Manifesto

DisCOs bring together the worlds of the Commons and P2P, Open and Platform Cooperativism, Distributed Ledger/Blockchain tech, and Feminist Economics together in a fresh, radical framework fit for addressing the challenges of our times. 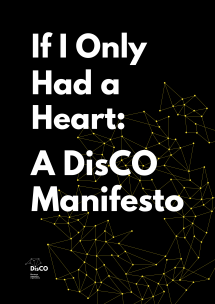 About if i only had a heart

“If I Only Had a Heart” represents a deep dive into Distributed Cooperative Organizations, or DisCOs.

What’s a DisCO? It’s a set of organisational tools and practices for groups of people who want to work together in a cooperative, commons-oriented, and feminist economic form. It’s also a n alternative to another type of organization called Decentralized Autonomous Organizations, or DAOs.

We’ll examine the role of supposedly disruptive technologies in social change by providing a critical overview of blockchain technologies, DAOs and Artificial Intelligence. From there, we’ll explain and compare DisCOs to DAOs, and why we stand for “distributed” over “decentralized” and “cooperative” over “autonomous.” We’ll also explore worrying trends and interests in the blockchain space, particularly the neoliberal context of techno-determinism and AI (artificial intelligence). Next, we’ll talk about how cooperatives and the commons provide important historical precedents for decentralised models. Then we’ll break down the four main components of the DisCO framework: the Commons and P2P, Open Cooperativism, Open-Value Accounting, and Feminist Economics. Following that, we’ll offer the Seven DisCO principles, a 21st-century expansion on the original seven cooperative principles.

Next, we’ll explain why DisCOs were not conceived as a theory, but instead arose from the lived experience of a commons-oriented collective: Guerrilla Translation/ Media Collective. There follows an overview of the governance/economic model used in Guerrilla Media Collective, with its various value streams for tracking pro-bono/ commons generating “Love work”, agency/paid “Livelihood work”, and the explicit recognition of reproductive or “Care work”. We also discuss the federation strategy for DisCOs and how nodes within a particular DisCO can work with each other.

The next section explores the issue of care work, which is mostly absent in the blockchain space. We also question one of the defining features of the blockchain: “trustlessness”, and how we see it as part of a spectrum with “trustworthy” at the other end. This leads us to the Community Algorithmic Trust, or DisCO CAT, the platform where value tracking takes place and how we conceive it as a human/machine hybrid that holds, even encodes, the goals and values of the collective. We then ask what radical workplace democracy looks like by taking a closer look at what it means to be a DisCO and discussing the characteristics of Open-Value Cooperativism — the radical edge of Platform Co-ops.

The publication ends by proposing our concept for the future of work — restoration — and how we believe that DisCOs represent a more realistic and socially positive use of the potential of Distributed Ledger and Blockchain technologies. We also discuss the various demographics which are explicitly included within the DisCO framework (Co- ops, Commons, Feminism, Open Source communities, the precariat, etc.) and talk about where we are with the DisCO project right now and where we’re bound.

Why did we write this publication? Because we’ve been observing and interacting with the blockchain space from a very particular point of view, that of the commons, which is sometimes alluded to but often misunderstood. It also brings together our lived experience in Guerrilla Translation and Media Collective and what it means to be a distributed organization based on the needs of people, as opposed to making people fit the needs of software architecture. We strongly believe that DisCOs can be a useful tool for the precariat in self-organizing into purpose-oriented collectives to foster economic counterpowers against predatory capitalism.

We want the DisCO Manifesto to reach as many people as possible. We’ve taken the time to describe concepts from the Commons/P2P, Open Cooperative, Feminist Economic and Distributed Ledger Technology (or DLT) spaces. Each of these movements speaks to its communities in specific terms and cultural references, and of course the jargon that results can be alienating — both among these movements and to the general public. We’ve tried to strike a balance by providing descriptions, hyperlinking to further resources, and including extensive footnotes for those not familiar with the terminology. On the subject of links: if you are reading this text in a printed version, you can find an ordered list of all the hyperlinks in this webpage. All of the embedded videos are compiled in this playlist. These materials will help enrich your understanding of DisCO and the movements it intersects.

For more resources on DisCOs, please visit our website: DisCO.Coop. If you’re pressed for time, here is a simplified summary for those familiar with blockchains and DAOs.