Our Public Water Future The global experience with remunicipalisation

Privatisation on the backfoot as new book shows that the growing wave of cities putting water back under public control has now spread to 37 countries impacting 100 million people. 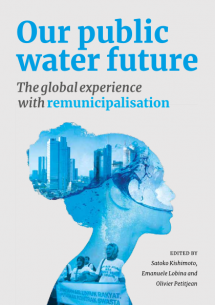 About our public water future

TNI has joined with a number of organisations to launch Our public water future: The global experience with remunicipalisation that details the growing wave of cities and communities worldwide that are bringing water services back under public control.

The book is launched in the run-up to the World Water Forum in South Korea (12-17 April) and comes in the wake of Jakarta’s decision in March 2015 to annul its privatised water contracts citing the violation of the 9.9 million residents’ human right to water.

This is the largest remunicipalisation in the world, suggesting that water privatisation is running out of steam and the pendulum is swinging back in favour of a reinvigorated, accountable and sustainable public control of water.


Key findings of the book

Water remunicipalisation refers to the return of previously privatised water supply and sanitation services to municipal authorities, and is also broadly used to refer to regional and national-level services in some cases.

From Jakarta to Paris, from Germany to the United States, this book draws lessons from this growing movement to reclaim water services. The authors show how remunicipalisation offers opportunities for developing socially desirable, environmentally sustainable and quality water services benefiting present and future generations. The book engages citizens, workers and policy makers in the experiences, lessons and good practices for returning water to the public sector.

News: new article is added to Un futur per l’aigua pública in September 2015 (Calatan edition of Our Public Water Future).