State of extraction: The new scramble for Africa

In recent years Africa has experienced waves of new investment, particularly in mining, energy and agriculture, and has seen elevated commodity exports. These flows are tantamount to a new scramble, creating wealth for foreign direct investors, some local entrepreneurs and a growing comprador class. Resources are typically exploited without raising the living standards of the people and at significant environmental cost. On the ground this has engendered significant resistance. The new scramble is a modification of traditional imperialist relationships which Africa experienced with former occupying colonial powers. But how do we understand the differences between the old and new scrambles? Who ultimately holds the power? 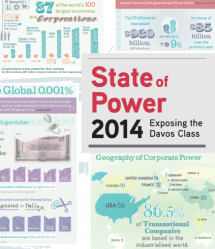 About state of extraction: the new scramble for africa

The African economy has more than tripled in size since 2000 and the IMF forecasts that Africa will account for 11 of the 20 fastest growing national economies in the world up to 2017. But are these boom conditions – often related to oil or gas discoveries -- either sustainable or beneficial to the population? Whilst there is a growing middle class, said to be 300 million strong, inequalities seem to have sharpened. Over 50% of Africans, according to the Africa Progress Panel , live on less than US$1.25 per day. The benefits are therefore accruing to foreign capital and a sprinkling of local partners. In some cases wealth is accruing to large state-owned corporations, allowing leading politicians and their families and entourages to syphon off the cream. This is particularly notable in Equatorial Guinea and Angola, whose ruling dynasties continue on their respective thrones decade after decade.

This boom has been noticed by global capital which has sought to engage with the continent more vigorously. The traditional links sewn up with the EU and the USA are being outflanked by the recent entry of some newer players. Investors are impressed by growth rates. They see Africa as under-populated, under-polluted, under- regulated and replete with large amounts of arable land and fresh water resources. Africa has become the site of many large-scale land and water acquisition transactions, often referred to as ‘land grabbing’.

The new scramble follows similar patterns to those of the old, without the factor of direct political control. It requires a willing local comprador class, which becomes a junior partner in the exploitation of local people, and often acting in the interests of a neo-imperial project. With globalisation and the consolidation of free markets and neoliberal ideology, there is much more complicity between the state and global capital. Often the collaboration with transnational capital is implemented through programmes of localisation, indigenisation or ‘black economic empowerment’. Few African firms, with the exception of a handful of South African companies, have emerged as global players, yet there is a growing layer of African politicians and entrepreneurs who form part of what Susan George has dubbed the ‘Davos class’.