The fourth edition of our annual State of Power report, coinciding with the international meeting in Switzerland of what Susan George calls “the Davos class”. This series seeks to examine different dimensions of power, unmask the key holders of power in our globalised world, and identify sources of transformative counter-power. 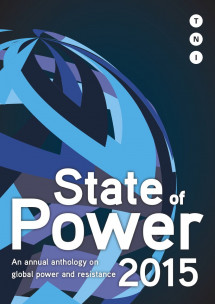 This year, TNI experimented with ‘crowd-sourcing’ by putting out an open call for contributions. We were keen to engage activist-scholars outside our immediate circles and curious as to how this would shape the content of the report. The compiled essays cover an impressive breadth of themes, from corporate law to the dominance of the financial sector, from big mining to food speculation. They also bring to the fore social struggles to challenge power dynamics, from Mexico to Mozambique, from Canada to Italy and Greece.

How transnational corporations have succeeded in replacing rule of law with Global Corporate law, using a multitude of norms, treaties and agreements - most recently the Transatlantic Trade & Investment Partnership - to secure their rights to profit above human rights.

Many people understand how the Internet has revolutionised society, but have we really grasped the power implications? Richard Hill shows how US policy-makers have used the ad hoc ‘multi-stakeholder’ governance of the Internet for political and economic ends.

Financial speculation has not just rewarded bankers; it has played a major role in fuelling hunger, land dispossession and climate change. Yet the financial sector innovates false financial ‘solutions’ to the very problems it creates.

The horrific forced disappearance of 43 students in Iguala reveals how organised crime and corruption thrive in conditions of institutional or democratic weakness, shaped to a large extent by distinctive transnational relations (importantly, in this case, with the US). Fortunately groups like the Movement for Peace with Justice and Dignity are showing a burgeoning ‘social power‘ that has the potential to change politics and policy.

How have mining transnational companies and the extractive industry become so powerful in every country, no matter their political shade? Marshall shows how the ‘promiscuously intimate’
relationship between governments and companies developed and how we might resist.

Austerity in Greece and Italy has struck workers' particularly hard, but it has also been the context for radical innovations in ’organising the unorganised’, building new kinds of work spaces and even taking control of production.

Economists consistently have upheld the power of elites, at times by taking their side overtly, but most often by ignoring or obscuring power, giving economics a veneer of science, in which the impact on people and the environment is hidden from public view.

In addition to these featured essays in the book, a number of other excellent submissions were received, which can be seen in our 'recommended reading' section.